Is Panasonic's CM1 a camera or a smartphone?

It's officially a camera, but more hybrids could be coming 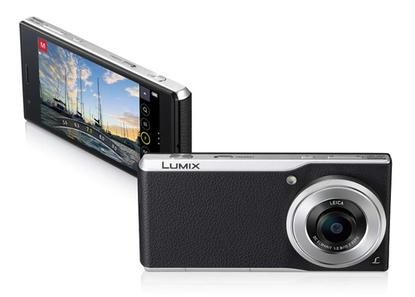 You'd be forgiven for thinking Panasonic's latest gadget is a smartphone. It's a slim rectangle with a touchscreen and LTE connectivity.

But officially, it's a digital camera. The Lumix Smart Camera DMC-CM1 was unveiled Monday at Photokina in Cologne, Germany, one of the world's largest trade shows for photography.

It packs a 20-megapixel, 1-inch sensor as well as an f/2.8 Leica lens that extends from the body, which at 15 to 21 millimeters deep (depending on where it's measured) is the world's thinnest for a camera with its features, according to Panasonic.

It's designed to be an advanced compact camera without the bulk, plus the ability to make and receive calls, upload images to social media sites and to shoot video in 4K. Another feature that might appeal to camera buffs is a control ring around the lens that lets users modify shutter speed, ISO sensitivity and other variables.

It has a Qualcomm 2.3-GHz quad-core processor, 16 GB of internal storage and a microSD card slot that can expand storage capacity to 128 GB.

The CM1 isn't the first camera to boast LTE connectivity -- the 16-megapixel Samsung Galaxy Camera has that, but the latter looks like a compact camera and is slightly thicker.

The latest Lumix, though, has a phone icon on the 4.7-inch display's home screen and could easily masquerade as a smartphone until you flip it over to see the lens.

The hybrid creature follows Panasonic's exit from the consumer smartphone market a year ago. It continues to make business tablets with phone functions and some clamshell handsets for consumers.

The CM1, however, does not represent a strategic about-face, according to the company.

"We call it a communications camera," a Panasonic spokeswoman in Tokyo said. "It has a high-spec lens and high-spec image-processing technology."

The Lumix shooter is a test product, she said, adding the manufacturer could introduce other such communications cameras if this one is well received.

It joins other products such as the Nokia Lumia 1020, which boasts a 41-megapixel camera sensor, and the Samsung Galaxy K Zoom, with its 10x optical zoom lens, in the growing segment of high-end camera-phone hybrids.

The CM1 is intended for limited release in Germany and France in November and will carry a suggested retail price of 899 euros (US$1,163). No official release date has been decided for Japan yet, the spokeswoman said.