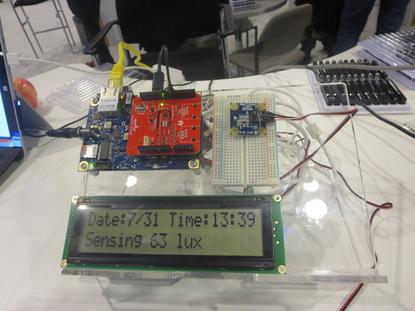 The company is currently putting a stripped-down version of Windows 8 on Intel's Galileo development board to bring the OS to a "smaller class of devices," said Colin Murphy, senior technical product manager at Microsoft, during an interview at the Intel Developer Forum in San Francisco.

But the demand for the Galileo board with Windows has exceeded expectations and Microsoft is now looking to put the OS on more boards such as Intel's Galileo 2 and MinnowBoard Max, Murphy said.

"You'll see that evolve. We're working with Intel and other partners putting Windows on those boards," Murphy said. "There's a whole range of boards we'll be investing in."

Microsoft is tapping into the community of enthusiasts -- also called makers -- to come up with ideas on the types of devices in which Windows could be used. With the Galileo board, Microsoft researchers have put the OS in a piano and a robotic refrigerator that can deliver cold drinks. The software company also has provided instructions on making a thermal sensor, smart fan and smart bulb. Microsoft's goal is to link such sensor appliances to the Azure cloud service, where data could be fed and analyzed.

Microsoft has also hinted at releasing developer boards for Windows RT and Phone, through which mobile applications could be written. Murphy declined to comment about that.

Microsoft is also trying to combat the dominance of Linux in the maker community. Popular development boards like Raspberry Pi and BeagleBone run on Linux. Intel's Galileo also runs on a light version of Linux from the Yocto project, but Microsoft has now added Windows support.

The demand for Galileo from the Microsoft developer ecosystem has been overwhelming and that bodes well for putting Windows on smaller devices, Murphy said.

"We only thought we'd get a few numbers, a few thousand people maybe, but it's just blown out of the water," Murphy said.

Investments are also being made in driver development, so components and devices work as soon as they are plugged into developer boards.

Driver development is important and will bring a "desktop user experience for the developer where they plug and play and they can start writing their app for devices," Murphy said.

The idea of developing cool devices may seem like fun, but Microsoft is taking the Windows on Devices program seriously as it looks to expand in the Internet of Things market. The program builds on over a decade of investment in Windows compact and embedded operating systems, and Microsoft now hopes the new OS will lead to a new family of smaller and sophisticated Windows devices.

The newer boards with the slim version of Windows 8 will also provide a fresh look at Windows.

"It's reinvigorating some of the markets we're in today with newer technology and the latest platform updates," Murphy said.