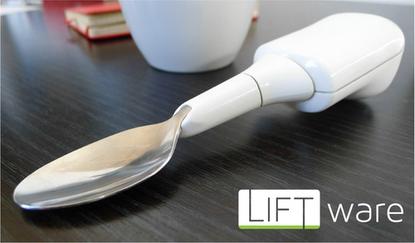 Google has acquired Lift Labs, which makes a mechanical spoon for people suffering from tremors, in a move giving Google new technology for combating neurodegenerative diseases.

San Francisco-based Lift Labs will become part of Google's Life Sciences division within its Google X research facility for next-generation projects. Terms of the deal, which has already closed, were not disclosed.

Lift Labs makes an eating device called Liftware that uses an on-board computer to detect and counteract hand tremors in the millions of people suffering from essential tremor and Parkinson's disease. The device senses hand tremors and oscillates to counteract them and steady the user's hand while they eat. A spoon attaches to the end, but other attachments like a fork and key holder are in the offing.

Eating can be a source of frustration and embarrassment for people with the condition who struggle to eat without making a mess.

Google said in its announcement that it will explore how the technology could be used in other ways to improve the understanding and management of neurodegenerative diseases, including Parkinson's and essential tremor.

Essential tremor is a movement disorder that, like Parkinson's, can interfere with common daily activities such as eating, drinking and writing. There is no known cure for Parkinson's or essential tremor. Lift Labs' device is meant to provide an additional option beyond treatments like antiseizure drugs.

As part of Google, Lift Labs will be scaling its operations to reach more people who could benefit from using tremor-canceling devices.

One person who may have particular interest in the device is Google co-founder Sergey Brin, who has a genetic mutation that he has said gives him a higher chance than most of developing Parkinson's.