The livestream of Apple's launch event was marred by interruptions 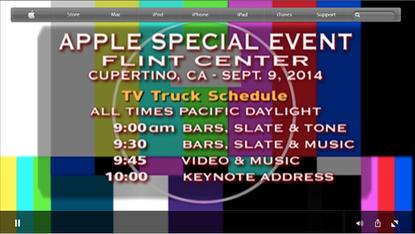 For a company that's famous for stage managing its eventsdown to the tiniest detail, the livestream of Apple's launch event for its Apple Watch and new iPhones left a lot to be desired.

#AppleFail became a popular hashtag on Twitter Tuesday as people who tried to watch the event online were met with constant interruptions, dropped sound and occasionally a simulcast in a different language.

Another compared the presumed chaos in the broadcast center to Homer Simpson at the controls of the Springfield Nuclear Power Plant.

It was all the more unfortunate for Apple given that its event coincided with the cellular industry's annual CTIA conference in Las Vegas, meaning industry bigwigs at the show likely had trouble following along too.

Even before the Apple event began there were problems, as two different songs played over the live stream, competing for attention.

Then as it got under way, the stream displayed a test card message from the broadcast team on site. After that, the stream constantly stopped, started, backed up and fast forwarded again.

There was also a simultaneous translation of the event, which some users identified as Mandarin, playing over the top while CEO Tim Cook and other Apple executives were speaking.

Part way through the event the stream became more reliable, so that people could at least see the most anticipated part of the event -- the launch of Apple's smartwatch.

But it's likely Cook and his team are less than pleased with the way the online broadcast turned out.