It hosts the first of seven meetings, which one critic has labeled a PR stunt. 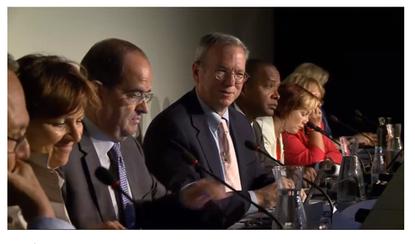 Google has received more than 100,000 "right-to-be-forgotten" requests from people who want information about them removed from the search engine, it said Tuesday at a meeting in Madrid.

The meeting was the first in a series of seven where experts invited by Google will share their views on a European court ruling that gave people the so-called "right to be forgotten" by search engines -- an approach that one critic has called "a PR war."

Those at the meeting, which was webcast, discussed the impact of the May ruling by the Court of Justice of the European Union (CJEU), giving people the right to compel search engines to remove search results in Europe for queries that include their names if the results are "inadequate, irrelevant or no longer relevant, or excessive."

The invited experts included a human-rights advocate, a Spanish Supreme Court magistrate, the president of the Spanish Communication Users Association and a historian. They shared their opinions with members of Google's advisory council, including Wikipedia founder Jimmy Wales and former German Minister of Justice Sabine Leutheusser-Schnarrenberger. Google Executive Chairman Eric Schmidt and Chief Legal Officer David Drummond are also on the council.

Since the ruling, Google has received "north of 100,000" take-down requests, which will be individually evaluated, Drummond said. He could not say how many of the requests have been granted.

Google's advisory council seemed mostly concerned with two questions. First, council members wanted to know Google should be responsible for dealing with the take-down requests. Second, they asked if the ruling has struck the right balance between protecting people's privacy rights and the right to information.

Search engines alone should not decide if a link should be taken offline, said Alejandro Perales, president of the Communication Users Association. He called for collaboration between the relevant authorities to review take-down requests, although he did not elaborate on who those authorities are.

That sentiment was echoed by others. "Google should not have the final call," said Pablo Lucas Murillo, a magistrate on Spain's Supreme Court. He also agreed with Perales that a legal framework is needed for the right to be forgotten.

Alberto Iglesias Garzón, project manager at the Gregorio Peces-Barba foundation for human rights said that Google faces a "tremendous change" if it has to continue evaluating take-down requests.

The ruling would also allow Google to delete links automatically after receiving a request, he said. Google could perhaps leave it to others to evaluate take-down requests, he said.

Google is trying to set the terms of the debate and wants to be seen as open and virtuous, she has reportedly said, in comments that an organization spokeswoman confirmed. However, Google hand-picked the members of the advisory council, and will control who is in the audience and what comes out of the meetings, Falque-Pierrotin has said in various published reports.

Meanwhile, the A29WP is preparing guidelines to ensure a consistent implementation of the take-down ruling on the part of search-engine providers, as well as consistent handling of complaints lodged with authorities by people whose requests are denied. Data protection authorities plan to issue the guidelines this fall.