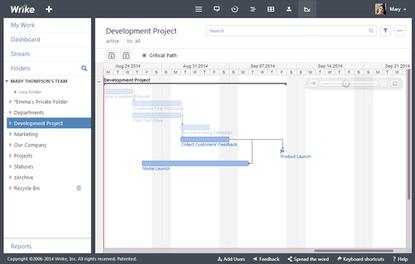 The new features are available for Wrike Enterprise, which is the most sophisticated of the three versions of the cloud product and which can be used to manage projects involving thousands of people and resources across an organization.

The new features include the ability to create more detailed dashboards for projects, with activity streams and graphs, as well as generate custom reports zeroing in on specific aspects of a project and team. It's also now possible to share dashboards and reports with colleagues. Another new visualization tool automatically estimates the completion time of a project.

"We had a simple dashboard, but now we offer more sophisticated capabilities in that area," said Andrew Filev, Wrike's CEO and founder.

Wrike Enterprise has also been integrated with Okta's identity management product and supports the SAML (Security Assertion Markup Language) authentication and authorization standard, so its users can log into it via their companies' single sign-on system. In addition, it's now possible for customers to replace the Wrike logo with their company's brand to customize their workspaces.

The Wrike product combines project management and social collaboration so customers can use it to plan and track project tasks while also letting participants interact via discussions, email, file sharing, activity streams and other such methods.

Wrike, which is privately held and was founded in 2006, has about 100 employees and has raised $10 million in funding. It has about 6,000 paying customers, including Adobe, EMC, Ticketmaster and Hilton.

Wrike Enterprise, which is sold in on-premises and cloud editions, can be integrated and used with third-party products including Outlook, Apple Mail, Gmail, Google Drive, Dropbox, Box, Microsoft Project, Excel and IBM Connections. It costs an average of $25 per user, per month.