Dyson says its 360 Eye has the best suction among robots 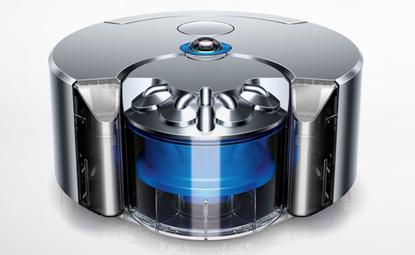 Dyson says its new 360 Eye has the most powerful suction of any robot vacuum cleaner.

Dyson has announced a robot vacuum cleaner it says can out-suck any other.

The name refers to an omnidirectional camera that sits atop the circular machine, with which it identifies features in a room and builds maps of its environment. It also uses infrared sensors to avoid obstacles while it cleans in a spiral pattern.

That approach to navigation differs from the one used by iRobot's Roomba, long the dominant dirt-sucking drone in the marketplace, with more than 6 million units sold worldwide. Roombas criss-cross a room using a combination of sensors and software to figure out where to go.

Dyson apparently spent 16 years and some £28 million (US$47.5 million) developing the 360 Eye, according to its YouTube channel.

The firm's strongest claim with the 360 Eye is that it has the most powerful suction of any robot vacuum. In its YouTube video, it adds that performance claims are based on machines available in the Japanese market in July 2014 -- that would include the latest Roomba, the 880, which hit Amazon Japan in March.

In another promotional video, Dyson said it developed a new motor for the machine that can suck up to 20 air watts (AW) compared to 0.22 AW for conventional floor robots. Its cyclone unit can also remove microscopic particles from the air, according to the company.

Other mechanical features include a rotating brush that spans the width of the robot, and treads for better traction over different floor surfaces.

The robot, which automatically recharges is batteries at a floor charging station, can be programmed via smartphone or tablet and the associated Dyson Link app.

The 360 Eye will debut in Japan next spring with an overseas release later, but a price isn't available on the company's online shop for Japan.