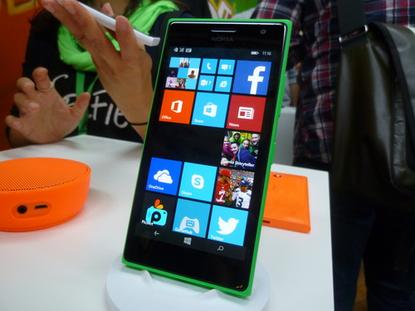 Microsoft will use price in the next round of its battle against Apple and Samsung to grow market share and convince more users to jump on the Windows phone platform.

This month the company will begin selling the Lumia 830, a fully featured smartphone that it believes stands up to Samsung's Galaxy S5 and Apple's iPhone 5S on technical specifications while being significantly cheaper, it said Thursday.

"We're going to challenge Apple and Samsung and expose the premium they are charging for a phone," said Chris Weber, corporate vice president of mobile device sales at Microsoft. He was speaking in Berlin on the sidelines of the IFA electronics show at Microsoft's first major product launch since it completed the acquisition of Nokia.

Among its main features is a better camera than its predecessors'. It can quickly go from standby to shooting and also capture 4K video, which is video at four times the resolution of high definition. It will also come with the latest version of Cortana, Microsoft's digital assistant, and a number of Microsoft productivity apps.

But will the lower price be enough?

Microsoft is still wrestling with an image that its smartphone ecosystem lags that of Apple and Google's Android. The perception was gained soon after Windows 8 launched, when early buyers found many of the most popular mobile apps weren't available on the new handsets.

"It's an area where perception lags reality," said Weber. "We've made a ton of progress."

The executive conceded there's "more work to be done," but he said the company feels good about the 320,000 apps now available in its app store and the progress it's making, which includes 500 new apps per week.

Annette Zimmermann, an analyst with Gartner, agreed with Weber's assertion.

"They've done huge work," she said. "There's still a gap but the gap is smaller than people think."

Zimmermann, who is based in Munich and covers consumer markets and technology, said the biggest weakness for Windows smartphones came in "longtail apps" like those for regional banks and airlines. But, she said, they are slowly appearing.

A major job for the company is in getting phones into the hands of people and turning around that negative image.

Many consumers make decisions on new phone purchases by researching online, paying attention to advertising and asking friends for their recommendations, said Zimmermann. That means a general decision is often made before they enter a store.

"The marketing is still lagging a bit, they need the right messaging," she said.

Gartner estimates that Microsoft has a 3 percent share of the global smartphone market.