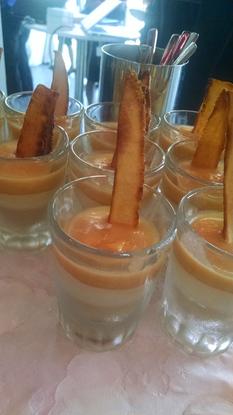 And for dessert, how about another Watson creation, the "Caymanian Plantain Dessert."

When not busy helping to find new treatments for cancer, IBM Watson is helping to cook up a few new dishes as well.

To show off Watson's powers, IBM is training its cognitive computing system to suggest new combinations of ingredients that could help cooks to create new, and sometimes quite delicious, recipes. It does so by analyzing the chemical compounds in each ingredient.

IBM joined Bon Appétit magazine to create a Web application called Chef Watson, now in beta, that offers lists of ingredients that can be used to create recipes. Bon Appétit is also working up a cookbook of the best Watson-based creations submitted by users.

IBM focused Watson on the culinary world to "help the public understand what these new types of technologies are capable of doing," said Mike Rhodin, IBM senior vice president in the Watson Group, at an event Thursday to promote a new cloud service, called Watson Discovery Advisor. That service can help researchers in any field find fresh connections within vast realms of data.

"Much the same way Jeopardy helped people understand that cognitive systems could understand questions using natural language, Chef Watson helps us understand how these new systems can be used in our everyday lives," Rhodin said.

Tuning Watson to the culinary arts has proved to be a success story for IBM.

Watson "starts building an understanding of what ingredients and compounds work well together, and it then extrapolates and looks for new patterns," Steve Gold, IBM vice president for the Watson platform, said in an interview. "Turns out, Watson is really good at coming up with combinations of ingredients that have never been tried before."

In February, IBM set up a food truck at the SXSW interactive arts conference to show off some Watson-inspired recipes. It drew long lines of hungry attendees.

IBM Research first developed Watson to compete with human contestants on the Jeopardy game show in 2011, using natural language processing and analytics, as well as many sources of structured and unstructured data, to answer the shows questions.

In the years since, the company has been working to commercialize the Watson technology, identifying industries that could benefit from cognitive computing, such as health care, law enforcement and finance.

To help its researchers better understand the culinary arts, IBM paired with the Institute of Culinary Education in New York.

"Working with the system has augmented our creativity as chefs. It changes the whole way we approach our craft in the kitchen," said James Briscione, director of culinary development at the Institute of Culinary Education, speaking at Thursday's event.

Tasteful combinations of ingredients are at the core of good cooking. Some combinations have long been known: A nice piece of fish can be accentuated with some lemon, butter and herbs.

In the culinary arts, chefs often deploy "known combinations" of ingredients and foods, Briscione said. But they're are always looking for new combinations, too, scanning cookbooks and magazines and travelling to exotic locations to taste local foods.

"The challenge in our world is to move to the next step," Briscione said. "We want to push forward and try to find new ways of putting things together."

In the past few years, a trend has been to combine ingredients with complementary aromatic properties, the chemical compounds that produce the flavors people experience.

For example, caviar and white chocolate go really well together, even though one is salty and the other is sweet, because those two ingredients share a lot of aromatic compounds. Tomatoes, mozzarella, and Parmesan cheese share common compounds, making pizza a naturally delicious dish.

Watson puts this new wave of experimentation in overdrive, offering cooks lists of ingredients that may go well together by way of their aromatic properties. The chef can then look for ways to combine the ingredients in novel ways.

Because Watson is a learning machine, it's producing better recipes now than it was at the start of the project 18 months ago, Rhodin said.

"It was a little challenging to work with at first, and now it is making really innovative, incredible and exciting food," Briscione agreed.

For example, working with Watson, the Institute of Culinary Education came up with a Portuguese-inspired lobster roll with saffron, green olives, basil, and shreds of crispy pork. "I never would have set out to put [these ingredients] in a lobster roll," Briscione said. Yet the combination proved to be quite tasty.

Mixed drinks are also game for Watson. For SXSW, the chefs came up with a bourbon cocktail with vanilla, bananas and turmeric. Again, these are not ingredients that have historically been combined, but the Watson matching proved to be "an amazing combination," Briscione said.

Watson-inspired dishes can span different cultures and regions. Another dish the culinary school created was the Vietnamese Apple Kabob, consisting of pineapple, pork, chicken, mushrooms, and strawberries, which all share similar flavor compounds.

"We try to put together combinations of regions and ingredients that make no sense, and we try to make sense out of them," Briscione said.

In much the same way it is helping in cancer research, Watson is proving to be quite the time-saver, suggesting approaches that would take humans too much work to arrive at otherwise.

"Coming upon this information on your own, you'd be locked away for months at a time, digging through chemical analyses and trying to line up all the ingredients, and you still may never get there," Briscione said.