Signal is compatible with RedPhone, its Android sibling 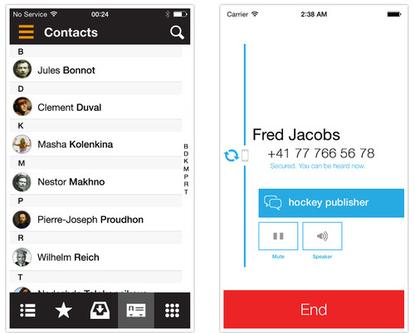 The first free voice call encryption application for the iPhone, called Signal, has been released by Open Whisper Systems.

An open-source project has released the first free application for the iPhone that scrambles voice calls, which would thwart government surveillance or eavesdropping by hackers.

Signal comes from Open Whisper Systems, which developed RedPhone and TextSecure, both Android applications that encrypt calls and text messages.

Signal is notable for two reasons. First, it's free. There are many voice call encryption products on the market for various platforms, most of which are not cheap and are aimed at enterprise users.

Second, Signal is open source code, meaning developers can look at the code and verify its integrity. That's important because of concerns that software vendors have been pressured into adding "backdoors" into their products that could assist government surveillance programs.

The beauty of Signal is its simplicity. Setup requires verifying the device's phone number through a one-time code that is sent by SMS. Signal displays only the contact details of the other user who has it installed.

It provides end-to-end encryption of voice calls over a data connection. Signal displays two words on a screen during a call, which are meant to be verified with the party on the other end to ensure a man-in-the-middle attack isn't underway.

Signal adds to a growing number of mobile encryption offerings from software vendors. Silent Circle, based in Washington, D.C., offers encrypted calling and texting services for a monthly subscription, and is a partner in Geneva-based SGP Technologies which makes the BlackPhone, a security minded device released last month.