Mac Bryla uses v8.2 to make sense of the statistics behind the 2014 football tournament 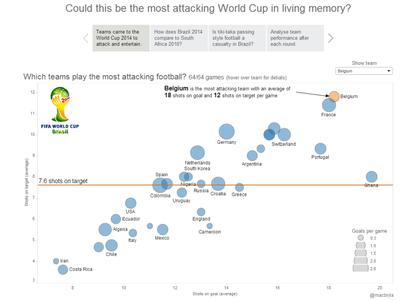 Bryla took data from the 2014 World Cup and attempted to demonstrate which team was the most attacking by calculating shots on goal per game and shots on target in each match. The result is an easy to read graphic that demonstrates which teams were the most aggressive. The median strip divides high conversion rates from the low.

Note the progressive information linked by the narrative feature across the headings at the top of the screenshot.

Tableau Software visualises data. The vendor's software sources figures from a database or utilises information inputted by the user to create interactive and versatile graphs, charts, maps and more by compiling figures into displays which thrive on variables.

Tableau sales consultant and football fanatic, Mac Bryla, has demonstrated how the software can be used to analyse data from the recent 2014 World Cup in Brazil.

Bryla took data from the tournament and used the software to demonstrate a number of unique features about the tournament. These were posted on the firm’s Tumblr page and Bryla’s personal blog.

Featured above are a few snapshots of the software's capabilities. Interactive visualisation can be accessed via the Eye See Data web site.