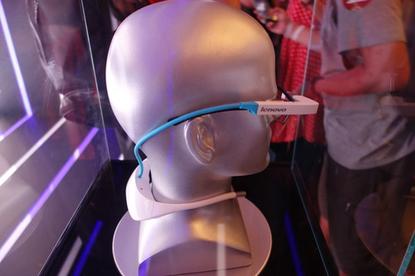 Lenovo showed off a smart glasses prototype on Thursday, part of a push to attract developers and other hardware manufacturers to a new partner program.

The wearable device looks similar to Google Glass, but has its battery attached down at the user's necks. More details will be announced in October.

Lenovo is also looking for partners to help it develop products ranging from wireless routers to air purifiers for its home market of China. The PC maker wants to team up, and even invest in tech companies that work on products beyond PCs and smartphones.

To that end, Lenovo has established the "NBD" platform. If it wants to address a broader market, including connected devices that make up the so-called Internet of things, Lenovo can't just build the hardware independently, and hope it sells, company executives said to journalists on Thursday.

"Right now there are too many kinds of devices you can develop for the Internet of Things. It's too rich. Not one company can do it all," said Chen Xudong, Lenovo senior vice president.

The NBD platform, which in Chinese stands for "new bench," can offer funding, manufacturing, hardware research and other logistical support to partners. It's currently geared for the Chinese market, but Lenovo could use it to jumpstart products for international distribution.

"We hope to use Lenovo's advantages to combine with innovators," Chen added. "This platform can help them quickly start selling products, and create a supply chain for the market."

In addition to Lenovo's own smart glasses prototype, the vendor is partnering with U.S. smart glasses maker Vuzix to bring its own product to China. The M100, which uses Android 4.0.4 and a 1GHz dual-core processor, will first go on sale to developers for 8,000 yuan (US$1298) in August or September, and is meant for business users.

German company Luftmed is working with the NBD program to sell an affordable air purifier in China that can be controlled via smartphone. The New Air X330 is meant to offer cleaner air and more accurate statistics than competing products.

Also on display Thursday was a wireless router, developed in partnership with other Chinese companies, that can be managed remotely via a mobile device.

As it branches out beyond PCs, Lenovo has typically introduced new product categories in China, before deciding whether to sell them internationally. It took this approach with smartphones, tablets and smart TV products.

Other Chinese companies are also seeking to extend their influence through partner programs. In April, the country's leading search engine, Baidu, announced its own project to attract hardware makers to build smart devices using the company's technology.