More AT&T customers switch to paying for their phones 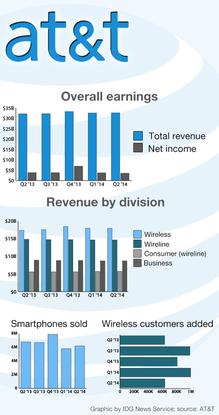 AT&T's financial earnings highlights for the past five quarters.

A majority of AT&T's new smartphone customers are now choosing a plan where they pay for their phones over time, helping to drive strong second-quarter financial results, the carrier said.

Under the AT&T Next plan, introduced last July, subscribers make monthly device payments and can switch to a new phone model once a year. That saves AT&T from having to subsidize the phone, something U.S. mobile operators have done for years at great cost. Interest in Next is accelerating, making up more than 50 percent of the carrier's smartphone additions and plan upgrades in the second quarter.

AT&T Next and multiple-device, shared-data plans also led subscribers to buy and use more mobile data, the carrier said. Just over half of its postpaid customers are on AT&T Mobile Share plans, and 49 percent of those accounts have signed up for 10GB per month or more.

As consumers shifted how they pay for their phones, AT&T brought in less revenue from mobile services in the quarter but far more from selling devices. It expects even more customers to move away from subsidized plans over the rest of the year, executives said on a conference call Wednesday.

That's good for business, AT&T says. The company gained more than 1 million postpaid wireless subscribers in the quarter, its biggest gain in almost five years. Current customers also stuck around: Postpaid churn, or customer turnover, was just 0.86 percent, the second-lowest figure in the history of U.S. mobile operators, according to Ralph de la Vega, president and CEO of AT&T Mobility.

The carrier's LTE network now reaches more than 290 million U.S. residents and should be substantially completed by the end of the summer, de la Vega said.

In its wireline business, AT&T gained 488,000 subscribers to its U-Verse High-Speed Broadband service during the quarter. About 70 percent of the company's broadband customers subscribe to that service now. AT&T's planned acquisition of satellite service provider DirecTV, which is still pending regulatory approvals, is proceeding on schedule, the company said. That deal will help AT&T bundle video, voice and data services together for more customers, Chief Financial Officer John Stephens said. "Service bundles are a proven winner for us," he said.

AT&T's overall revenue for the quarter was US$32.6 billion, up 1.6 percent from a year earlier. Earnings per share declined to $0.68 from $0.71, but the company stood by its forecast for higher revenue and earnings per share for the full year.