Profits for the quarter were down, however 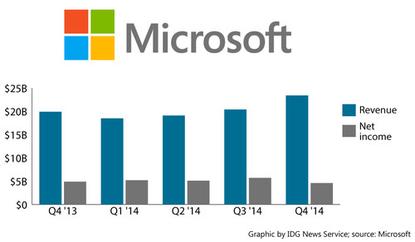 Microsoft's earnings to the fourth financial quarter of 2014

Revenue for the quarter ended June 30 was $US23.4 billion, up from $US19.9 billion last year and ahead of the consensus analyst estimate of $US23 billion, according to a poll by Thomson Reuters.

The revenue figure includes $US2 billion from the Nokia Devices and Services business that Microsoft acquired. That deal closed 25 days after the start of the quarter.

"We are driving growth with disciplined decisions, bold innovation and focused execution," CEO Satya Nadella said in a statement.

Nadella said commercial cloud revenue doubled year over year to a $US4.4 billion annual run rate. Microsoft is switching its focus to selling more cloud services and away from on-premises software.

The Devices & Consumer Division grew its revenue 42 percent to $10 billion, including the $2 billion from Nokia phone hardware.

The results for the quarter - the fourth of Microsoft's fiscal year - don't include any impact from the 18,000 job cuts Microsoft announced last week and which will be carried out over the next 12 months.

In the new fiscal year, which started July 1, Microsoft expects pre-tax costs from the layoffs in the range of $US1.1 billion to $US1.6 billion. The layoffs, amounting to about 14 per cent of the company's staff, are the largest in Microsoft's history. The majority will come from Microsoft's recently acquired Nokia business.