iPhones and iPad sales were both slower than expected 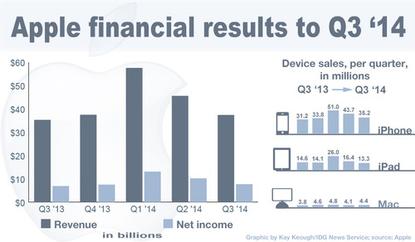 Apple's earnings to the third financial quarter of 2014

Apple has racked up another hugely profitable quarter on sales of iPhones and Macintosh computers, though its revenue growth was slower than expected.

Apple reported a profit of $US7.7 billion for the April to June quarter, up 12 per cent up on the same period last year and ahead of analyst estimates of US$7.5 billion, according to Thomson Reuters.

Revenue was $US37.4 billion, 5 per cent higher than last year but slightly below analyst expectations of $US38 billion. Apple had told investors to expect revenue of between $US36 billion and $US38 billion for the quarter.

Apple CEO, Tim Cook, attributed the growth to "strong sales of iPhone and Mac and the continued growth of revenue from the Apple ecosystem."

The company sold 35.2 million iPhones in the period, a quarterly record, though analysts had been expecting higher sales of 35.9 million units.

IPad sales continued their slide, to 13.3 million, down 9 percent on the same period a year earlier and just over a million units below analyst estimates.

Mac computers were a bright spot. Apple sold 4.4 million of them in the quarter, up 16 percent on the same period of 2013.

Looking ahead, Apple said it expects revenue in the current period, from July to September, to be between $US37 billion and $US40 billion.

"We are incredibly excited about the upcoming releases of iOS 8 and OS X Yosemite, as well as other new products and services that we can't wait to introduce," Cook said in a statement.

Apple is expected to announce a successor to the iPhone 5S, presumed to the be iPhone 6, in the coming months. Apple typically launches iPhone models in mid-September, in time for the holiday shopping season.

While it's yet to announce details of the phones, The Wall Street Journal has reported that Apple will launch two models: one with a 4.7-inch screen and one with a 5.5-inch screen.

The current iPhone has a 4-inch screen, and internal Apple studies, highlighted during a recent court trial, have shown larger screens are the single most wanted feature for future models.