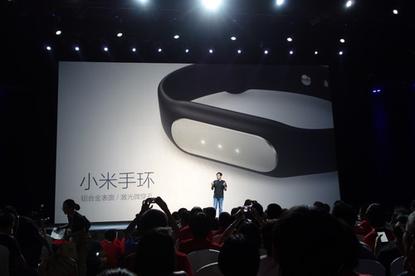 Chinese smartphone maker, Xiaomi, is bringing its low-price strategy to wearables, and offering a smart wristband that will sell for a mere $US13.

Called the Mi Band, the device is meant mainly to be a fitness tracker with a 30-day battery life. But when worn, the wristband can also automatically unlock the user's smartphone when in close proximity. This gets rid of the annoying need to always input your password into your handset, Lei said.

"The first time I tried Xiaomi's wristband, I couldn't put it down," he added. "Once you start using a wristband to unlock your phone, you won't go back."

In addition, the Mi Band is water-resistant and has an alarm function that will vibrate the device when set.

No mention was made of when the wristband will be available, or where it will launch. But the Chinese company has been expanding globally, and is targeting 10 foreign markets this year, with the eventual goal of reaching the US.

"We want Xiaomi to become an international brand that the Chinese people can be proud of," Lei said at the event.

Helping to drive Xiaomi's popularity are the company's affordable products, which are sold just above cost.

To cut costs, the smartphone maker has bypassed the traditional sales model, and instead, mainly sells phones through its own online store, and relies on word-of-mouth marketing to promote its phones. The approach has worked so well that its put pressure on local handset rivals, and forced them to emulate its strategy.

Xiaomi's new Mi Band could shake up China's wearable industry. But already, some smart wristbands in the country are coming in at low prices, between 99 yuan ($US16) and 199 yuan, according to local online sellers.