Thin, light, wire free -- Intel's vision for your next PC 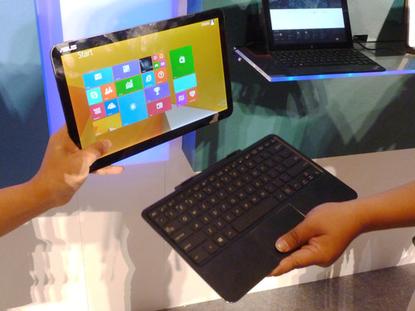 The Asus Transformer Book T300 Chi on show at Computex in Taipei on June 4, 2014

Intel wants your future laptop to be thinner than an iPad and, like the iconic tablet, to be wire free. And it should cost less too.

The company is developing chips and wireless technologies to meet those goals, with the first fruits of that development available starting this coming year-end holiday said, said CEO Brian Krzanich on an earnings call this week in which he discussed the company's vision of future PCs. About 600 million PCs worldwide are more than four years old and due for upgrades, so the development efforts come at a fortuitous time.

Tablets thinner and lighter than the iPad that could be used as full PC replacements will be on store shelves by the end of this year, Krzanich said. Laptops and desktops with the faster and more power-efficient Broadwell processor will be widely available in the first quarter next year. Further in the future, Intel sees Chromebooks with mobile broadband connectivity and PCs that are wire free.

Paper-thin PC replacement tablets will have long battery life, high-resolution screens and offer the fast performance of Core processors, Krzanich said. The devices will have Intel's new Core M chip, based on the upcoming Broadwell architecture.

A reference tablet code-named Llama Mountain, which is 6.8-millimeters thick and weighs 550 grams, is one example of this new system type. The 10-inch tablet has a 2560x1600-pixel screen and turns into a laptop when attached to a keyboard dock. The dock also has cooling technology to crank up the tablet's Core M CPU performance.

Asustek later this year will ship the Transformer T300 Chi dual-function device, which has a 6.8mm detachable tablet. The product will also have a Core M chip.

Anticipation is growing for Broadwell, which will be in a wider range of low-priced and performance PCs in the first quarter of next year, Krzanich said. Intel typically updates chips every year, but the current Haswell chips have been around for one-and-a-half years and have upset typical PC upgrade cycles.

Looking beyond Broadwell, Intel will release the successor Skylake, which could also be in PCs next year. With Skylake, Intel hopes to disconnect wires from PCs with integrated support for wireless docking, charging, display and data transfers. Intel previewed the wire-free technology last month at Computex, with computers not needing power cords, display connectors and peripheral cables.

A handful of PCs with Skylake could be available next year, but the chip could start shipping in volume in 2016, said Dean McCarron, principal analyst at Mercury Research.

"The environment's not that competitive, so it's more likely they'd take advantage of the time and let Broadwell have the normal product life," McCarron said.

Broadwell and Skylake chips will improve graphics and introduce DDR4 memory to PCs for faster internal data throughput. The chips will be made using the 14-nanometer process, which will bring faster performance and more power efficiency than the current crop of 22-nm chips.

Intel also wants to bring mobile broadband connectivity to Chromebooks, though no time frame for that was provided by Krzanich. Right now, Chromebooks with Intel chips largely don't have mobile broadband, but the chip maker wants to put its modem in the laptops so the Internet is more accessible.

"Chromebooks are best when they are connected," Krzanich said, adding that those requirements will drive use of modems in laptops.

A majority of Chromebooks currently have Pentium and Celeron chips based on Haswell and low-power Bay Trail microarchitectures. Intel is due to release new Pentium or Celeron chips code-named Braswell, which will be used in Chromebooks.

Windows tablets with Intel's Atom chip code-named Cherry Trail, which will succeed current Bay Trail Atom chips, will also be on store shelves by the end of the year. Android tablets could be added to the mix next year.