The company has to work faster to make up for the drop, CEO Marissa Mayer says 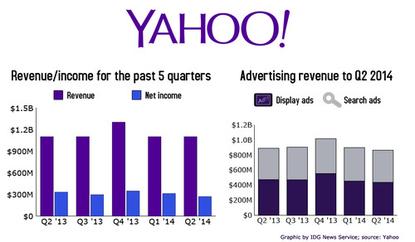 Yahoo's earnings for the second fiscal quarter of 2014.

Yahoo reported falling sales and mixed results in its crucial advertising business on Tuesday, signaling further challenges ahead in CEO Marissa Mayer's efforts to turn around the aging company.

Total sales for the second quarter ended June 30 were US$1.08 billion, down 4 percent from the $1.14 billion reported during the same quarter last year, Yahoo said.

Excluding traffic acquisition costs, revenue was $1.04 billion, down 3 percent from the 2013 quarter and below the consensus forecast of $1.08 billion from analysts polled by the Thomson Financial Network.

On a non-GAAP basis, which excludes certain expenses, earnings per share were $0.37, slightly below analysts' expectations of $0.38.

"Our top priority is revenue growth and by that measure, we are not satisfied with our Q2 results," Mayer said in a press release. "While several areas showed growth, their growth was offset by declines," she said.

Search advertising revenue, which rose by 2 percent to $428 million, lent a little shine to an otherwise lackluster set of results.

But there weren't many other bright spots. Display ad revenue dropped by 8 percent to $436 million, "highlighting the fact that we need to work faster to ameliorate the negative trends," Mayer said.

And while the number of display ads sold rose by 24 percent compared with a year earlier, the price per ad fell by the same percentage.

The quarterly results were announced around the two-year anniversary of Mayer's appointment as CEO. Since 2012, she has tried to turn Yahoo around, partly by redesigning legacy products, making bets in digital video and acquiring startups for engineering talent.

Still, she has yet to produce strong growth in Yahoo's core advertising business to help the company better compete against Google and Facebook.

Alibaba, the Chinese e-commerce giant, has helped to bolster Yahoo's stock by virtue of Yahoo's 24 percent stake in the company. Alibaba is expected to go public soon, and when it does Yahoo will be required to sell some of its shares, which should bring in a lot of cash.

But on Tuesday, Yahoo said it had entered into a share repurchase agreement with Alibaba that reduces the number of shares it has to unload at the time of the IPO. Instead of 208 million shares, it will only have to sell 140 million. That could mean less of a windfall for shareholders.