3D printer constructs 10 buildings in one day from recycled materials 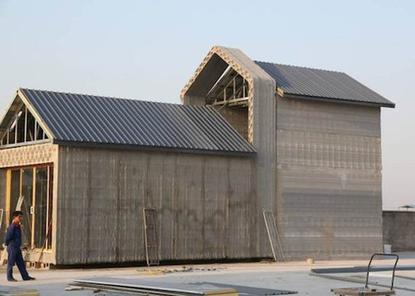 Yingchuang New Materials 3D printed everything on this building but the roof. The building was constructed in a factory offsite and them assembled onsite.

Using four huge 3D printers, Yingchuang New Materials Inc. was able to print the shells of 10 houses in 24 hours and at a cost of only about $5,000 per building.

The 3D printed buildings will be used as offices at a Shanghai industrial park.

Video: A demonstration of Yingchuang New Materials constructing the walls of a building with its massive 3D printer.

Like their desktop counterparts, the construction-grade WinSun 3D printers use a fused deposition modeling (FDM) technology to deposit materials one layer at a time like squeezing frosting from a pastry bag.

A computer using a CAD design controls a mechanical extruder arm to lay down the concrete, which is treated with special hardeners so that each layer is hard enough to support the next as the machine moved back and forth.

The buildings are constructed in parts inside Yingchuang New Materials' factory, one wall at a time, and then joined together at the build site.

The Yingchuang factory and research center, a 33,000 square foot building, was also constructed using the 3D printing manufacturing technique. It only took one month to construct, according to Ma Yihe, the founder and president of the company.

Yingchuang is not the first organization to use 3D printing to create structures, even if it is the first to prove the technique for constructing multiple buildings in a single day.

Several years ago, researchers at the University of Southern California (USC) also demonstrated 3D printing techniques to construct entire buildings in less than a day.

As outrageous as it sounds, such machines can already extrude concrete walls with internal reinforcement fast enough to complete the shell of a 2,000-sq. ft. house in under 20 hours.

The robotic extruding method, called Contour Crafting, is comparable to its smaller 3D desktop printer counterparts in that it takes its orders from CAD software, which stores and executes the architectural designs. The designs can be customized on a construction site even as work is underway.

The machines can also automatically embed all the conduits for electrical, plumbing and air-conditioning, as well as place electronic sensors to monitor the building's temperature and health over time.

Behrokh Khoshnevis, a professor of industrial and systems engineering at the USC Viterbi School of Engineering, is leading the effort to perfect the Contour Crafting construction technology.

A Contour Crafting-machine, which is made up of a metal gantry frame, along with the robotic extruding system, weighs about 500 pounds. It comes in two pieces and can be quickly erected on a construction site.

Each layer of concrete extruded by the machine is four inches thick and about six inches in height. Using special hardeners in the concrete, the material is hard enough to support the next layer by the time the machine circumnavigates the outside perimeter of a structure.

Khoshnevis believes 3D printing will not only enable affordable housing in third-world countries, but could also be used to construct off-world buildings by using materials native to those planets.

Unlike Yingchuang's 3D printers, which build structures one wall at a time, Contour Crafting's machines construct an entire building in one continuous movement.

The canal house was built of thermoplastics in pieces that measured about 6ft. x 6ft. by 12 ft. in size and then assembled on site like Lego pieces.

Based in Suzhou, China, Yingchuang has been developing the 3D printing construction technology over the past 12 years, according to a report from Chinese television company CNC World.

Yihe plans to build 100 recycling factories in China in order to collect building debris and recycling them into inexpensive building material for the 3D printers, according to the 3D printing design website, 3ders.

Additionally, Yihe told 3ders that Tomson, a well-known housing group, has approached him to build a villa.