Le Tote subscribers pay $49 per month to get totes with outfits and accessories that they can keep or exchange. 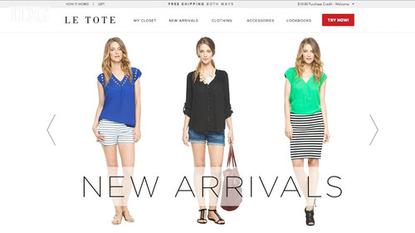 Startup Le Tote is hoping to gain an edge in the world of online retail with a Netflix-like shopping platform for women who want to add new pieces to their wardrobes without buying them.

The San Francisco-based company offers a subscription rental service for clothing that's similar to Netflix disk rentals for movies and television shows. Customers pay $49 per month and receive a tote with three garments and two accessories. They can exchange the tote for a new one as many times as they want. Watch a video report about Le Tote here.

Unlike e-commerce sites that rent outfits for special occasions, Le Tote is targeting customers who want clothes for everyday wear and to supplement what's already in their closets.

"Our [value proposition] is not, 'Wear this to a wedding.' Ours is, 'You can wear this out with your friends, you can wear it to work," said Rakesh Tondon, co-founder and CEO of Le Tote. "Maybe you already have a nice pair of pants and you just want more tops. We can give you that."

Each tote has a retail value of $300 to $500 and contains clothing from recognized labels such as French Connection and BCBG, as well as lesser-known brands.

"It's a great way for you as a customer to discover a brand you may never have heard of, but [it] fits you really well, you like the aesthetic. On the vendor side, it's a great way for them to get access to a new customer base," said Brett Northart, co-founder & president of Le Tote. Customers can also buy an item they like and want to keep at a discount of as much as 50 percent off the retail price.

Le Tote launched in October 2012 as an invitation-only website and opened to the broader public in July of last year. Le Tote's founders won't disclose how many totes the company sends out every month or the number of subscribers the site has, but it did say the customer base has been growing by 30 percent to 40 percent per month over the past six months. The rapid growth has been good for business but has also presented some challenges for the company.

"With physical inventory, you've got to scale that up, and there's also team associated with moving that product back and forth," Northart said. "We're definitely building the runway as we're landing the plane."

Le Tote has raised about $2 million from Google Ventures, Andreessen Horowitz and other investors. It participated in the prominent Silicon Valley incubator Y Combinator last summer.