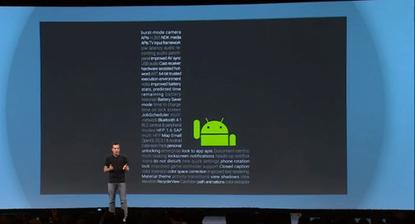 Catching up with Apple, Google is setting the stage for device makers to release 64-bit smartphones and tablets with the Android L operating system.

Google's 64-bit compatible Android L is available for download as a developer preview, and mobile devices should be available by year-end after the final version of the OS is released.

Based on historic trends, tablets and smartphones with 64-bit Android may even arrive as early as October, said James Bruce, lead mobile strategist at ARM, whose processors are used in most mobile devices.

Android tablets with 64-bit chips may be first out of the gate, followed by smartphones, ARM's Bruce said.

It appears that it took some prodding from Apple for Google to speed up its efforts to release a 64-bit version of the Android OS. Apple created waves when it released the 64-bit iPhone 5S last year, after which Samsung and other Android mobile device makers put 64-bit on their roadmap. Apple had the 64-bit compatible A7 chip and iOS software, but Android device makers initially had neither the hardware nor software.

"Apple changed the timing for everybody when they came out with the 64-bit iPhone," said Nathan Brookwood, principal analyst at Insight 64, who is happy to see 64-bit finally reach Android.

The new version of the OS provides the first opportunity for manufacturers to start announcing 64-bit Android devices. Android L has been tuned to work on devices with 64-bit ARM, Intel and MIPS processors. Some tablets, like the recently announced Venue 7 and Venue 8 Android, already have 64-bit chips but a 32-bit version of the OS, Android 4.4 KitKat. Those devices can be upgraded to Android L.

Intel also expects new 64-bit tablets with Atom chips code-named Bay Trail and Android L to become available by year end. The OS will also be in tablets with an upcoming Atom chip called Cherry Trail, and in smartphones with Moorefield and Merrifield processors.

"All those devices are going to run Android [64-bit], and they will run them great," said Erik Reid, vice president in the Mobile and Communications Group at Intel.

On the ARM processor side, Nvidia is bringing Android L support to its 64-bit Tegra K1 chip, which will be in mobile devices during the second half this year."There is one version of L. It supports both 32 and 64 bit processors. We are already working on L with Tegra K1 64-bit," Nvidia spokesman Ken Brown said in an email.

Qualcomm, whose chips go into most smartphones, has also announced 64-bit ARM-based chips, but did not immediately respond to a request for comment about support for Android L. On its part, MIPS said it will bring Android L support to its chips.

Users should care, since Android L and 64-bit chips will combine to bring faster performance to smartphones and tablets, Brookwood said.

Sixty-four-bit improvements will make games look better, and devices will be able to decode and encode high-resolution video faster. Algorithms for facial recognition and speech interaction will be able to take advantage of 64-bit processing.

Intel has been testing 64-bit chips with Android in its labs and has seen performance benefits in graphics, data encryption and decryption, decompression and applications with large data sets. Mobile devices will be able to have more than 4GB of memory, and "fewer trips to the memory" will be required to process applications, said Doug Fisher, vice president and general manager of Intel's Software and Services Group.

Intel is working with Google to made kernel-level changes for Android L, and will make an x86 distribution available at a later date.

Improvements in Android L also will help improve mobile device battery life, Insight 64's Brookwood said. In addition, the notification and application launching mechanisms have been revamped in the OS.

Google has said that Android applications will run two times faster on ART, the new Android 64-bit run-time environment for application execution. Android developers won't have to make many code changes to move to ART from the Dalvik runtime, Brockwood said.