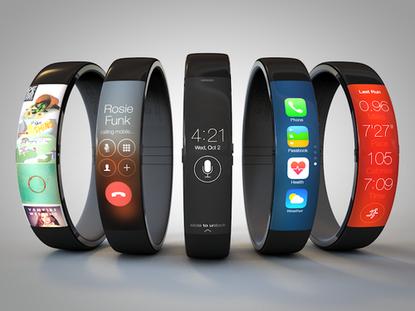 Todd Hamilton has conceived one of more stunning iWatch concepts

The iWatch won't be an official product until it's announced on the stage of an Apple press event, but a Thursday report lends more credibility to rumours that Apple's smartwatch is imminent. Referencing various anonymous supply-chain sources, Reuters has reported that Taiwan's Quanta Computer will begin production of Apple's mythical wearable in July.

Details are scant, but the Reuters report says Apple's smartwatch will feature a 2.5-inch, slightly rectangular, arched touch display, and will be juiced by wireless charging. The gadget will have a heart rate sensor, and connect only to Apple devices running iOS.

The watch would go on sale in October, and Apple expects to sell 50 million units within one year of the wearable's release. LG will make the watch's display, and Quanta--a company that already makes Macbooks and iPods--will account for at least 70 percent of total iWatch production.

Or at least that's the news from a trio of sources that Reuters quotes off the record.

Should Apple release the iWatch (or whatever the gadget is to be called), Microsoft will be the last remaining consumer-tech giant to keep its hands out of the wearables space. Hardware manufacturers see wearables as the next step in mobility beyond smartphones and tablets, but an Apple wearable is far from a sure consumer hit.

The wearables market is expected to grow by 500 percent by 2018, but currently not a single smartwatch has successfully made the transition from nerd-oriented curiosity to mainstream success. The Pebble watch is just an idie cult favorite. Sony's two smartwatches have near-imperceptible public mindshare. And Samsung's four smartwatches, while the recipients of generous marketing support, have yet to fulfill Samsung's own promise of being "the next big thing."

Still, if any smartwatch stands a chance of success, it's the iWatch. Apple enjoys the benefits of an extremely unified, consistent, user-friendly hardware-software ecosystem. So if the company can position the iWatch as the perfect wrist-worn complement to the iPhone, the Apple wearable truly could become "the next big thing."

The keys to any iWatch success will be simple elegance and execution. How easy will it be to use apps on the extremely limited screen real estate of a 2.5-inch display? How will Apple surmount perennial wearable bugaboos like Bluetooth dropouts and short battery life? And what whiz-bang features will convince fence-sitters to put a completely new gadget type on their wrists?

If any company can figure out the smartwatch conundrum, it's Apple. But the company will need to move quickly--and keep an eye trained on the competition. At next week's Google I/O conference, Google is expected to demo LG's G Watch, which runs the Android Wear OS. It essentially puts the highly acclaimed Google Now digital assistant on the user's wrist.

Android Wear smartwatches won't be anything like what Apple is poised to deliver in the iWatch. But they could put serious pressure on the iWatch, four month's before Apple's wearable is even released.