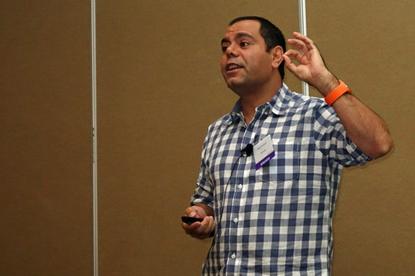 With open-source software and hardware, including the Arduino device platform, it's possible to develop the guts of a fitness tracker for just US$100, said Moe Tanabian, a Samsung senior director and head of the company's Smart Things IoT Innovation Lab.

"That's why we have this explosive growth in wearables, and this will continue in IoT as well, and it's going to change the world," Tanabian said Monday at the Internet of Things World conference in Palo Alto, California.

Though the company has about 400,000 employees worldwide, its innovation culture is like that of a five-person startup, he said. The team members developing new products at Samsung's lab all have both design and engineering skills, with at least enough understanding of each side to know what the other goes through. On each project, they rapidly build about eight to 20 prototypes, each in three weeks or less, before finding the best approach. Then they take that idea to Samsung's home base in South Korea.

The Silicon Valley lab typically works on four projects at a time and has already developed Samsung technology that's gone on the market, including elements of the Galaxy S5 smartphone, Tanabian said.

Simplicity is key in consumer devices, and "the best user interface is no user interface," he said. That's why almost everything the lab is working on uses some element of machine learning. Tanabian pointed to the Nest thermostat as an example of a good user interface: All users have to do is set it manually for a while and the thermostat learns their preferences automatically.

Samsung uses the concept of "social weight" to judge whether a wearable is "worth wearing," Tanabian said. It's a combination of the cognitive load, or how much user engagement it demands; its physical presence on the body; and how it fits into social conventions.

Social weight marks the difference between Google Glass and some other wearables, such as Samsung's Galaxy Gear watch, according to Tanabian. Glass isn't bad on cognitive load, but its physical presence on the user's face sets it back, he said.

"It creates a distance ... between you and other people. That's why it's hard to convince people to wear them," he said.

As for the controversy over Glass users surreptitiously shooting video of the people around them, that could have been solved with the addition of a simple mechanical part, Tanabian said: a bright yellow circle that slides over the lens when the camera's off.

By contrast, smartwatches such as the Galaxy Gear typically have an acceptable physical presence, out of sight on the wrist, and fit the social convention of wearing watches, Tanabian said. The cognitive load of a watch varies depending on its user interface, he said.