US regulator keen on driverless cars, but urges caution around safety

A federal highway safety representative is generally excited about the technology 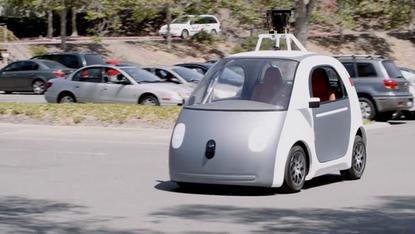 Google showed off its prototype self-driving car on Tuesday in a video and blog post. It wants to build about 100 vehicles and start a pilot program in California

One federal regulator sees a potentially bright future in driverless cars like those made by Google -- if their technology actually succeeds in making roads safer.

Google, Toyota and Nissan, and tech companies such as Nvidia, are developing driverless cars and advanced software that can take control of a vehicle at certain times when humans are behind the wheel. Companies involved in the technology tend to focus on the safety benefits of autonomous vehicles, which they say could reduce human error.

Safety goals could be accomplished, but companies need to be careful they don't introduce more distractions in the process, said David Friedman, acting administrator at the National Highway Traffic Safety Administration.

"It's an exciting future, but also a future in which we need to move carefully and cautiously," he said, speaking Monday at Bloomberg's Next Big Thing summit in Sausalito, California.

Friedman's comments help to illuminate how regulators might view the nascent industry of driverless cars at a time when there are still questions around the safety of the cars and how current laws may or may not relate to them.

The NHTSA was established by the U.S. Congress in 1970, focused on standards around motor vehicle and highway safety.

The agency is in communication with the big automakers and technology players to understand where the technology is going and develop guidelines around safety, Friedman said. The agency is also hiring electrical engineers inside and outside of the auto industry who understand new software development.

He urged technology companies to work with the agency to make sure they're in compliance with current safety standards.

Friedman commended Google's careful testing of its own cars. Recently the Internet company unveiled its prototype self-driving car, which it will start road testing this summer.

But he also urged companies to put safety ahead of making money on fancy new futuristic vehicles and gave a few recommendations to technology companies. Chief among them: New apps in cars, like Internet-connected software, don't create new distractions for drivers if they're still in control of the vehicle.

Driverless cars could be seen as the next leap, albeit a dramatic one, from what's already advanced tech in cars. Many new cars sold since 2011 have electronic stability controls to provide automatic braking in certain cases, which is itself a form of automation.

Tech companies like to say their driverless cars will remove the element of human error from driving. But technology won't remove human error, it will just shift it from the driver to the car's designers or engineers, Friedman said.

While there could be safety problems with driverless cars, Friedman said, "we're going to work as hard as we can" to minimize that possibility.