Tableau 8.2 can attach a narrative to a series of data visualizations 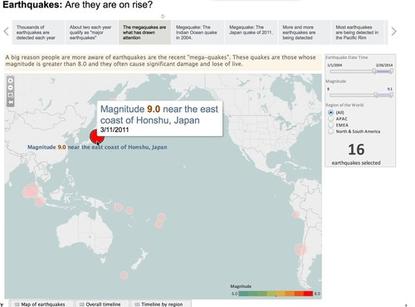 Tableau now allows users to create story lines that can help walk people through a report.

The upcoming update of Tableau Software's flagship business-intelligence application includes the ability to add a narrative to a report, allowing authors to tell a story about the data being displayed.

The idea is "to help people tell stories with data, to help them build a narrative from their data and share that with others," said Francois Ajenstat, Tableau's director of product management. "It will help data have even more impact for organizations."

Tableau 8.2, to be launched later this month, will also be the first version of the software that can natively run on Apple Macintosh computers.

Tableau is among the companies -- along with Qlik and Spotfire -- that specialize in offering easy-to-use, desktop-centric business-intelligence software packages. Tableau touts its strength as providing a wealth of possible ways to visually depict data.

With the upcoming release, Tableau will also provide a way for users to add a storyline to their reports, a feature called story points.

"People tend to remember concepts through stories. It's the oldest form of communication," Ajenstat said. "You can highlight interesting points in your views, and put it together in a sequence with a narrative."

This is how the feature works: A report author can include a strip of blocks that run across the top of a multipage presentation, with each block containing a short written summary of the data being presented on a single page. The author should summarize each page as if writing a narrative that moves from one point of interest to the next. The user can click on the summaries in a linear fashion to move through the report. They can also jump to any page of interest.

This approach can be more responsive than the typical report. Most reports today are made by creating a data visualization in BI software, and then cutting and pasting the resulting depiction into a PowerPoint presentation. "If the data ever changes, you have to go back through that slow, painful process," Ajenstat said.

Story points also provides the ability to interact directly with the data. Each page can provide a set of controls that allow the user to set the thresholds for how the data on that page is depicted.

"If someone in the audience wants to engage with that data and get additional information, they can interact with that and get more details and see a different perspective," Ajenstat said. "It's a little bit of a choose-your-own-adventure, but with a storyline that you put together."

A map-based visualization of earthquakes, for instance, can be adjusted with a set of controls to show only those earthquakes above specific level of magnitude.

In addition to the story points feature, the Tableau software will also, for the first time, be available for the Mac. The Apple edition of Tableau 8.2 will have all the features of the Windows edition. The software also takes advantage of some of the Mac's innate features, such as the crisp Retina Display. The icons and controls also have been recast in the Mac's native look and feel.

The Mac edition came about due to customer demand, Ajenstat said. The company had noticed that a sizable portion of its users were already running the Windows edition of the software on Macs, by placing them in virtual machines. This is the first time they will be able to run the application natively.

"There's definitely more Macs in the office than there was before," Ajenstat said.