HP's Pro Tablet 612 is being pitched as a laptop replacement, and will ship worldwide in September 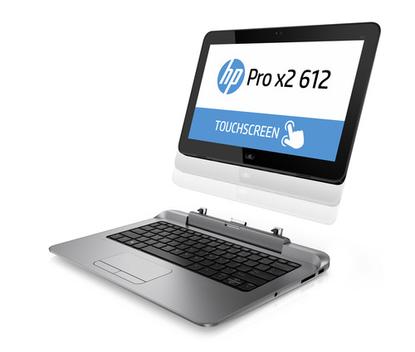 Hewlett-Packard considers its Pro Tablet 612 tablet to be a more feature-packed, albeit heavier replacement for a laptop than Microsoft's Surface Pro 3.

The tablet has a 12.5-inch screen, and can be placed into an optional keyboard dock to work as a laptop. The tablet will ship worldwide in September, and the company has not yet set a price for the product.

The Pro Tablet 612 carries over more features from a laptop into a tablet than any other rival product, including the Surface Pro 3, said Daron Chalk, product line manager for Windows hybrid products at HP.

"Those are not things you can find in other tablets," Chalk said. "We didn't want to make those compromises."

Microsoft advertised its recently launched Surface Pro 3 as a tablet that could replace a laptop. But Chalk said some features like the smartcard and fingerprint readers are not available in the Surface Pro 3, which are highly desired in the enterprise for multifactor authentication.

"We made the decision to build this particular product as a true laptop replacement," Chalk said. "The other product has a very different approach."

The separate keyboard dock even has an Ethernet slot and VGA port, which are not found on most laptops. The detachable keyboard has a hard feel, while the Surface Pro 3 Type Cover keyboard attachment is softer and flexible.

"They want to have a really good feel of the keyboard," Chalk said. "We're taking that into account."

But at 910 grams, the Pro Tablet 612 is heavier than the Surface Pro 3, which weighs 800 grams. It is also thicker with the bottom jutting out to accommodate all ports. Chalk said there were tradeoffs HP had to make to accommodate all the laptop features.

"You can make this thinner, but it's a matter of what you want to take out," Chalk said.