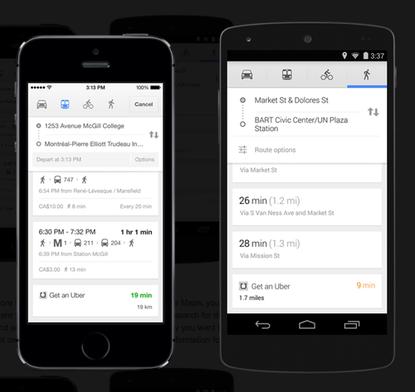 Google's Maps app shows you how far away an Uber ride is.

An intriguing feature that lets people find out how long they'd have to wait for an Uber ride is one of the new navigation tools in Google Maps' mobile app.

A card for Uber will appear in the options for any destination, along with transit and walking directions, so the user can compare his options in the updated Android and iOS versions of the app.

The Uber integration is currently active in more than 24 of Uber's biggest cities and works only for people who have the ride hailing service's app installed on their phones, Google said Tuesday.

The Uber card will display how far away the Uber ride is by time and distance, and will let the user jump into the Uber app with one click.

Beyond its own self-driving cars, Google clearly has an interest in other transportation services, so it will be interesting to see what integrations with Uber might come next.

Another app enhancement includes access to train schedules. For drivers, the app provides guidance on which lane to stay in or move to, as well as easier access to alternative routes, Google said.

Offline support is also included in the updated app, allowing users to search for an area, tap on its information sheet, and when available, select "Save map to use offline."

Finally, new filters are included to make it easier to browse through restaurants, bars and hotels using criteria such as opening hours, ratings and price.