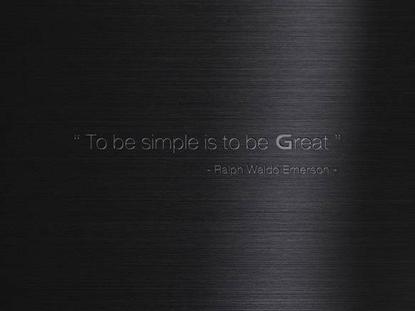 LG Electronics has sent out invites to an event on May 27, at which the company is expected to launch its next flagship smartphone, the G3, as well as the Android Wear-based G Watch.

The event will take place simultaneously in London, New York and San Francisco. The invite has the tag line "To be simple is to be Great," with the G in the same font as LG uses for its G family of products, hinting that the company is indeed launching a successor to the G2. Also, when presenting its first-quarter financial results on Tuesday, the company said it would launch the G3 during the second quarter.

HTC, Samsung Electronics and Sony have already launched a high-end smartphones this year, but LG has decided to wait a couple of months more. But looking at the G3's rumored specifications, it might turn out to be worth the wait. For example, the smartphone's display is expected to have a 2560 x 1440 pixel resolution and 3GB of RAM, instead of 1920 x 1080 pixels and 2GB.

The company has the know-how to produce the screen, thanks to its Display unit. However, at one point Samsung's Galaxy S5 was also expected to have a screen with the higher resolution, but that didn't turn out to be the case. Therefore, LG choosing to upgrade the screen resolution compared its predecessor, the G2, is far from a sure thing.

The extra time could also let LG choose Qualcomm's Snapdragon 805. Qualcomm has said the first smartphones based on the processor would arrive during the first half of the year, but HTC, Samsung and Sony all chose the Snapdragon 801 for their products, instead.

The G3 is also expected to have a more premium look compared to the G2 and a 13-megapixel camera with optical image stabilization, which is what the G Pro 2 already has. When LG introduced the G2 Pro in February it focused on improved video and camera features to make the device stick out from the competition. The same will likely be the case for the G3, as well.

LG might also use the May 27 event to launch the G Watch, which was introduced last month. The smartwatch is based on Android Wear. The device will be water resistant and have an always-on display, LG said last week.

Wear is a platform that extends Android to wearables. To make the OS a better fit for the small screens smartwatches have, the new user interface relies on voice control and Google Now to present what the OS thinks is relevant information to the user.