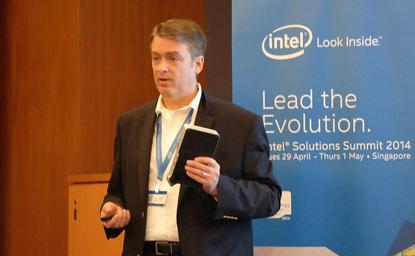 Intel is tackling thin client applications with the new version of its Next Unit Computing (NUC) kit.

Launched at the Intel Solutions Summit (ISS) 2014 in Singapore, the Thin Canyon is the first NUC to host an Intel Atom processor (model E3815 to be precise) based on Bay Trail technology. The CPU has a standard clock speed of 1.46GHz.

It differs from the manufacturer's original NUC, unveiled in late 2012, which was powered by a third generation Core i3 CPU, and subsequently followed by a fourth-generation, Haswell-based Core i5 model mid-2013. This was followed by tall NUCs which are slightly bigger to accommodate 2.5-inch drives.

It can also support 2.5-inch drives, continuing Intel's move to make NUC HDD-compatible rather than restricting it to SSDs.

Connectivity includes an eDP connector, three USB ports (one on the front, two at the back), HDMI, VGA, DisplayPort, and Ethernet.

With a claimed focus on solutions over hardware alone, Intel has partnered with Citrix and Citrus to bundle Thin Canyon with the former's XenDesktop 7 (for SMB and enterprise) and the latter's Fusion software (for SMB and education) at launch.

Citrus is offering a free, one-year trial of Fusion to channel partners taking the NUC on board.

Like the original NUC, Thin Canyon is targeted at kiosks, point of sale (PoS), and digital signage, continuing the niche drive Intel pursued with the first NUC.

Intel also expects the device to be relevant to modern Asia's urabn homes which are often be space-constrained.

Thin Canyon is immediately available to distributors. The kit is priced at $S169 for the kit, and $S129 for the board.

Nermin Bajric is attending ISS 2014 as a guest of Intel.