Acer's first wearable is a smartband 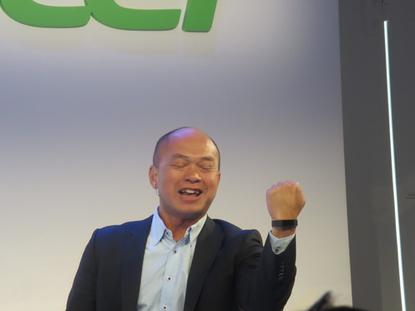 Acer is entering the wearable market with a fitness-tracking smartband for use with mobile devices.

The Liquid Leap smartband captures fitness information and has sensors to track a variety of health-related activity, the company said Tuesday at a press event in New York.

The 17-mm wide fitness tracker is mainly to be used as a companion to mobile devices, Acer executives said. It will be available in select markets by the end of July, initially with smartphones.

Acer does not yet have a wearable product on the market, but the company is trying to revitalize its hardware business around mobile devices, software and the Internet of Things.

Acer has focused its business on PCs for years, but newly appointed CEO Jason Chen said at the event that the company needs to move into "adjacent markets" as the PC market flattens out. Along those lines, Acer also showed many new high-end and midrange smartphones that it plans to release in the U.S. later this year.

The goal is to ultimately connect all devices to the cloud, so Acer is also investing in software and cloud services, Chen said.