The cars' computer can now handle a range of new situations on city streets, Google says 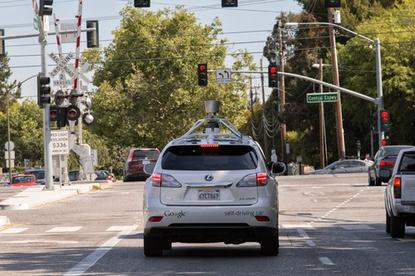 One of Google's self-driving cars, on the streets of Mountain View, California.

Google is taking its self-driving cars off the highway and onto city streets -- safely, it claims.

Google on Monday announced that its cars have now logged thousands of miles on the streets of Mountain View, California, improving the cars' software to automatically handle a range of situations that previously would have stumped the Internet company.

Google has been testing its self-driving cars, which it calls "autonomous vehicles," on the freeways of northern California near its headquarters in Mountain View. But over the past year, the company has shifted its focus to more complicated, and potentially dangerous, terrain: city streets.

The cars can now, for instance, navigate through some construction zones; keep a safe distance from large obstacles, like a truck on the side of the road; or pass through a four-way intersection without crashing, Google said. The software can now detect hundreds of distinct objects simultaneously, including pedestrians, buses, stop signs ... even a cyclist making a hand gesture that he or she is turning, Google said.

"A self-driving vehicle can pay attention to all of these things in a way that a human physically can't -- and it never gets tired or distracted," the company said.

The company says it has logged thousands of miles on the city streets of Mountain View, and 700,000 miles total for its cars.

"We still have more work to do, but it's fun to see how many situations we can now handle smoothly and naturally," said one of Google's testers for its self-driving car project, in a YouTube video describing the cars' new intelligence.

When it comes to search, Google is constantly tweaking its algorithms under the hood. That also applies to the algorithms that power the computers in its self-driving cars.

Google hopes that in the future its self-driving cars will help improve the driving experience -- working professionals could focus on their work instead of the road, and intersections can be made less dangerous with fewer distracted drivers.

But not everything that happens on the road can be predicted. In the best-case scenario for the future, Google's self-driving cars may only be made safe in certain situations or areas.

Google would also have to deal with any number of new laws and regulations over self-driving cars.

And Google right now is having a hard enough time getting a much smaller device -- Glass -- fit for the road. Many states still aren't sure what to make of it, or whether it's safe for drivers to wear.