Why Japanese watchmakers have no time for smartwatches

The fad of wearables-on-the-wrist doesn't resonate with Casio, Seiko and Citizen 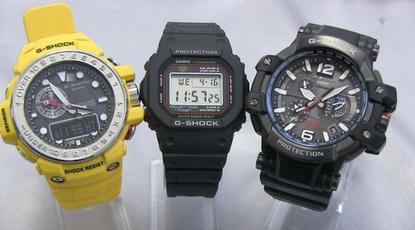 Casio's 30th anniversary re-edition of the original G-Shock rugged watch (center) is flanked by the G-Shock Gulfmaster (left), which has an atmospheric pressure sensor, and the G-Shock Gravitymaster (right), which receives timekeeping signals from terrestrial radio sources and GPS satellites.

If the Rufus Cuff smartwatch is anything to go by, some people want a lot of hardware on their wrists.

The crowdfunded watch is truly massive: 8 centimeters wide, with a 3-inch touchscreen, Wi-Fi, GPS and other features that make it seem like a smartphone strapped to your arm. The US$279 behemoth might look unwieldy to some, but backers love it. They've pledged over $230,000 to Rufus Cuff's Indiegogo fundraising campaign, more than meeting its goal of $200,000.

From grassroots campaigns to big manufacturers like Samsung, Sony and possibly Apple, smartwatches are starting to compete with traditional timepieces for wrist real-estate. The smartwatch industry was worth about $700 million in 2013 and is expected to reach $2.5 billion this year, according to Zurich-based research firm Smartwatch Group.

It seems like everyone's getting in on the game -- everyone, that is, except major watchmakers in Japan who have prided themselves on innovation, revolutionizing the industry in the 1970s and 1980s with quartz wristwatches.

It's certainly not for lack of high-tech chops. At the Baselworld watch trade show in Switzerland earlier this month, Casio showed off its latest designs for its super-rugged G-Shock brand.

The G-Shock Gravitymaster ensures it's showing the right time by picking up terrestrial radio signals as well as satellite GPS signals. Other G-Shocks are also connected, but to mobile devices. The DJ turntable-inspired G'Mix uses Bluetooth links to control music playback on a smartphone or to receive the correct time from a phone.

G-Shocks are evolving, and can still take the hard knocks they were designed to withstand when the brand was inaugurated 31 years ago. But while some Casio watches have smartwatch-like features, Casio sees a clear divide between its timepieces and wearable computers.

"As long as a watch can provide a new convenience to customers, we'll aggressively pursue new technology to be incorporated into the watch," said Shinji Saito, a product planner at Casio's Hamura R&D Center in Tokyo where G-Shocks are put through punishing tests.

"But the bottom line is, a watch is a watch and we think it should be able to display time whenever customers glance at their wrists."

The idea of having to recharge a smartwatch's battery for it to tell the time doesn't sit well with Casio, which launched its first wristwatch, the digital Casiotron, 40 years ago.

Swiss watchmakers have also scoffed at power-hungry wrist computers, with TAG Heuer CEO Stéphane Linder telling The Financial Times, "The idea of having to charge luxury watches kills the dream a bit."

Swatch Group CEO Nick Hayek has his own reservations about the smartwatch craze, recently commenting that he doesn't think fans of wristwatches would enjoy having to do frequent software updates that smartwatches can require.

Meanwhile, there were virtually no smartwatches on display at the Baselworld trade fair.

Current smartwatches on the market are smartphone wannabes and are trying to copy their functions, Casio's Saito said. He believes their ultimate goal is to become a smartphone for the wrist -- not unlike the Rufus Cuff.

Japan's other major watchmakers also produce dazzlingly cutting-edge timepieces, but smartwatches are a non-starter for them.

Seiko has evolved its Astron, which debuted in 1969 as world's first quartz watch, into a GPS-linked, solar-powered device that supposedly loses only one second every 100,000 years.

The manufacturer, which brought Japan's first wristwatch to market a century ago, has promoted accuracy and advanced features across its mechanical, quartz, kinetic and solar movements. But it has no plans for a smartwatch, and wants to focus on watches that impart passion, reliability and beauty, a Seiko spokeswoman said.

Citizen's latest flagship, the Satellite Wave F100, also synchronizes with orbiting timekeepers. The company said it spent two years developing a new movement to shorten the satellite signal reception time, claimed to be the fastest in the world, by one second.

Citizen is a diversified manufacturer that also makes digital blood pressure monitors, thermometers and pedometers. But it has no time for the smartwatch fad.

"Rather than being a watchmaking process, smartwatches are like making iPhones or computers," a Citizen spokeswoman said. "Our basic stance is that we want to produce watches, and that's why we don't make smartwatches."