The alleged Bitcoin creator received over US$23,000 worth of bitcoin from supporters 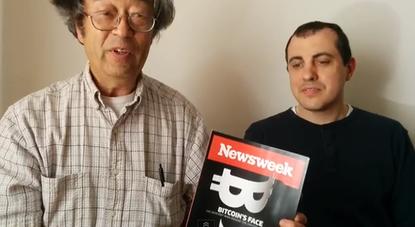 Dorian Nakamoto (left) thanks supporters who donated bitcoin to help him after Newsweek identified the cash-strapped man as the founder of the digital currency. Andreas Antonopoulos (right) of Bitcoin wallet service Blockchain organized the fundraiser.

The cash-strapped man Newsweek magazine named as the creator of Bitcoin has thanked supporters who donated over US$23,000 of the virtual currency to him.

Dorian Satoshi Nakamoto again denied being the mysterious mastermind behind Bitcoin in a YouTube video, and expressed his thanks to the Bitcoin community.

"There's 2,000 of you who donated, and I'm very happy. Each one gives me a tick in my heart," Nakamoto said in the video. "Thank you very much."

The 64-year-old California resident appeared in the video with Andreas Antonopoulos, a security official at Bitcoin wallet service Blockchain who organized an online fundraiser for Nakamoto in March.

"This man is such a kind and generous soul," Antonopoulos wrote on Reddit, expressing satisfaction that Nakamoto is happy.

Holding the edition of Newsweek that thrust him into the international media spotlight, Nakamoto said his ordeal is continuing. He ridiculed the notion that the supposedly secretive, anonymous genius behind Bitcoin would use his real name.

Media reports for years have speculated about the identity of the creator of Bitcoin, known as Satoshi Nakamoto.

The Blockchain fundraiser drew nearly 48 bitcoins, which is about $23,400 at the current price of $487 per bitcoin.

Nakamoto did not say if he would convert the donations to cash, or use them to fund legal action against Newsweek, but emphasized that he will use the bitcoin donation address and be part of the Bitcoin community.

In a letter released by his lawyer in March denying that he is the digital currency's founder, Nakamoto said he has been unable to find steady work as an engineer or programmer for a decade, and had to cancel his Internet service due to money woes.

He added that the Newsweek article harmed his prospects for gainful employment.

The magazine and its reporter Leah McGrath Goodman have stood by the article.