Violin and Microsoft play a duet to speed up applications 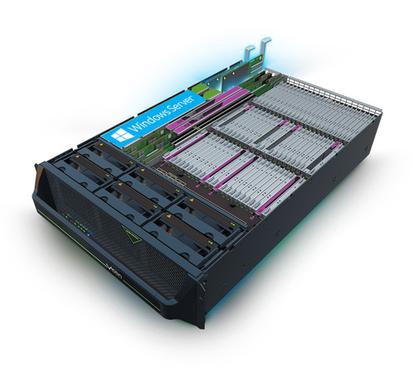 A partnership between Microsoft and Violin Memory will let enterprises tightly tie a new all-flash storage array to their servers, speeding up popular Microsoft applications.

The newly-introduced Violin's Windows Flash Array is a version of the company's 64TB storage array that's been modified to run Windows Storage Server 2012 R2. The system has more powerful blade servers and network interface cards than the standard array, but the star of the show is the Microsoft storage software, which Violin integrated into its system through joint coding modifications with Microsoft, said Eric Herzog, Violin's chief marketing officer.

Windows Storage Server is essentially a server operating system designed for use in external storage platforms. But the joint software development between Violin and Microsoft yielded an additional benefit: The companies included RDMA (Remote Direct Memory Access) and SMB (Server Message Block) Direct on the flash array, allowing it to deliver data right into the memory of Windows application servers, Herzog said. That's a faster way to get data where it needs to be for use in Microsoft applications. It also saves compute cycles on the app server's CPU that would otherwise be tied up bringing bits into memory from the external storage.

The deal brings Violin storage software features such as replication, cloning and snapshots that it had lacked, according to analyst Arun Taneja of the consultancy Taneja Group. While that's a big win for Violin, the main benefit to enterprises is the RDMA capability and the performance boost that comes with it. That differentiates Violin's storage software from that of other flash array vendors, albeit only in this product and for Microsoft applications.

It's true that combining Violin's all-flash array with Windows Storage Server should speed up Microsoft application servers, but what the two companies have done could have bigger implications in the future, according to Enterprise Strategy Group analyst Brian Garrett.

With blade-server hardware and what's essentially a Windows server OS inside the Violin array, the app servers don't even need to be there anymore, Garrett said. Violin could add the Hyper-V hypervisor to the platform and run virtual machines with apps, or virtual desktops, right in the array.

This kind of all-in-one storage and computing platform would offer even faster access to the data stored on Violin's flash, since there would be no network to traverse, Garrett said. Such a platform would be tailor-made for high-density VDI (virtual desktop infrastructure), and it would reduce overall space, power and cooling needs for any application.

Violin might consider such an architecture in the future, but not on the current blade servers in the Windows Flash Array, Herzog said.

The Windows Flash Array is shipping now. It includes eight 10-Gigabit Ethernet ports with RDMA-enabled network interface cards. It's priced in the same range as the company's standard flash arrays, around US$750,000 to $800,000, Herzog said.