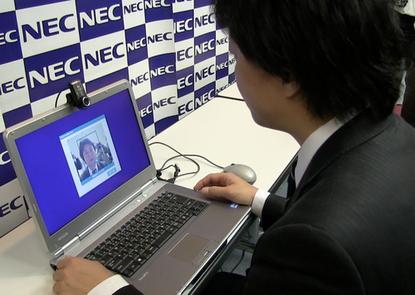 NEC has launched a biometric security program that uses face recognition to unlock access to PCs.

NeoFace Monitor is being billed as an alternative to passwords, which can be forgotten, stolen or guessed. Users simply look at a webcam on their PC to unlock it.

The system uses face-recognition technology that NEC has been developing for some 20 years.

It's a software package that uses a computer's webcam to verify the identity of a user by matching facial features to those in a stored image.

"We have been working on biometric technology for police forces, and now we want to provide it to meet the security needs of business clients," spokeswoman Naoko Ozeki said.

NEC said it has the most accurate face-recognition engine in the latest evaluation by the U.S. National Institute of Standards and Technology (NIST) known as the Multiple Biometric Grand Challenge.

The manufacturer's error rate in the Multiple-Biometric Evaluation Still-Face Track test, which measures the ability of the algorithm to compare compressed standard face images, was 0.3 percent, compared to 2.5 percent and 3 percent for the closest competitors, NEC said.

In several demonstrations at a press event Tuesday at NEC headquarters in Tokyo, NEC staffers sat down at laptops equipped with webcams. The system recognized their faces in about half a second and granted them access to their desktops. When the staffers left their seats, the laptops automatically locked.

NeoFace Monitor uses image-processing algorithms to track facial features such as pupils, the lower part of the nose and the corners of the mouth. NEC would not reveal exactly how many points on the face are tracked.

The program can recognize a subject even if he isn't facing the camera directly, has grown a beard or is wearing glasses.

But the surgical-style masks that many Japanese wear to guard against airborne pollen and germs are a problem for the system, NEC admitted, and users have to remove them to be authenticated.

Though user face images are stored on a server, the system can also work offline by using a PC's cache.

NeoFace Monitor works on Windows 7 and 8, and makes use of Microsoft's Active Directory to manage users. NEC is considering adding support for Android as well as smartphones in the future.

NEC is aiming to sell the system to about 400 companies and government agencies in Japan, North America and the rest of Asia over the next three years. NeoFace Monitor is basically priced at ¥10,000 (US$97) per PC.

NEC Hong Kong recently launched a compact device that uses the NeoFace engine to identify customers who walk into stores, banks or hotels. The Mobile Facial Recognition Appliance is being touted as a tool to offer "VIP treatment" to customers.

The spread of face-recognition technology has fueled concerns about privacy, but NEC said the NeoFace Monitor data will be protected on client servers.

"Since the facial features that are identified using this system are expressed exclusively in numerical data, a person's physical features cannot be restored/generated based on those numbers, thereby ensuring that the recognition of a person's image is not at risk," an NEC spokesman said.