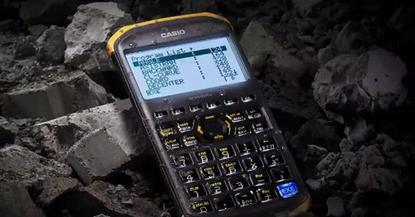 Casio's fx-FD10 Pro ruggedized calculator can stand up to shocks, splashes and dust. It's aimed at civil engineers amid a construction boom in Asian countries.

It laughs at splashes, dust and shocks. It eats military-spec drop tests for breakfast. It's ideal for math in the great outdoors.

Mainly aimed at land surveyors, the device has 21 programs for civil engineering purposes such as curve calculations for plotting road construction.

The 250-gram FD-10 Pro is housed in an elastomer-coated case so it won't slip out of a user's hands, even when wet.

It's got a backlit LCD screen for working in low light, an SD card slot for importing data from surveying equipment and a USB port to link with PCs. A series of side keys allow users to operate it with one hand.

It meets U.S. military standard 810G for shocks, and can be dropped from a height of 1.22 meters without damage, according to Casio.

The model is being launched to meet anticipated demand for construction related to the Olympics in Tokyo in 2020. The Japanese capital has been considering everything from a futuristic 80,000-seat stadium to a gondola lift as part of its makeover for the games.

Growing infrastructure demand in developing economies was another factor behind the launch, the spokeswoman added.

The calculator is also to be marketed in many ASEAN (Association of Southeast Asian Nations) countries, but launch dates will differ.

Casio is considering selling the FD-10 Pro worldwide as well, the spokeswoman said.