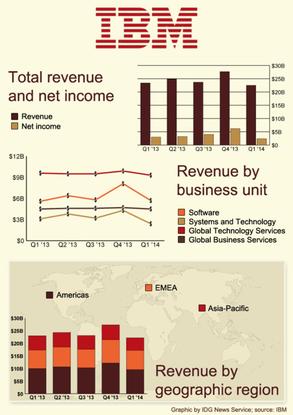 IBM's quarterly earnings for the past five financial quarters.

Falling hardware sales and the cost of layoffs hit IBM's profit hard in the first quarter, sending it down 21 per cent from a year earlier.

The quarterly results include an $870 million write-off for workforce rebalancing. Over the past few years, IBM has been cutting parts of its workforce as it shifts its focus to Cloud and analytics services. Up to 6000 IBM employees in the US may be at risk of losing their jobs this year.

"In the first quarter, we continued to take actions to transform parts of the business and to shift aggressively to our strategic growth areas. ... As we move through 2014, we will begin to see the benefits from these actions," IBM president and CEO Ginni Rometty said in a statement.

IBM made $US2.4 billion in profit in the quarter, down from $US3 billion a year earlier. Its earnings per share dropped to $US2.29, down 15 per cent.

The big drops in revenue came in the company's hardware businesses, continuing a downward trend. Overall hardware sales fell by 23 per cent to $US2.4 billion. Revenue from the Systems and Technology segment slid by 23 per cent from a year earlier, down to $US2.4 billion for the quarter. System Z mainframe sales fell by 40 per cent. Revenue from Power System servers was down 22 per cent.

Revenue from IBM's services business was also weak. Global Technology Services brought in $US9.3 billion, down 3 per cent. Global Business Services generated $US4.5 billion, about the same as last year.

Software did slightly better for the company, generating $US5.7 billion, up 2 per cent from the same time a year earlier. Sales of IBM's key middleware products, which include WebSphere, Information Management, Tivoli, Workforce Solutions and Rational products, were up 4 per cent from the year-earlier quarter, to $US3.7 billion.

The company is reorganizing itself to focus on areas where it sees growth ahead.

"As we move to these growth areas, we're also taking portfolio actions to divest businesses that no longer fit our strategic profile," said Martin Schroeter, IBM senior vice president and chief financial officer, in a conference call with investors.

"Many of these actions impact our top and bottom line in the short term, but have long-term benefits," he said.

Two recent actions in particular show the direction in which IBM is heading.

In January, IBM announced it is investing $1.2 billion to expand its cloud services to a global level. Building off its purchase of SoftLayer last year, the company plans to run 40 cloud data centers across 15 countries, with a presence in every key financial center, Schroeter said.

Even in this quarter, the SoftLayer cloud services added substantially to the revenue of the Global Technology Services unit, he added.

Also in January, IBM agreed to sell its System X server business to Lenovo, an instance of IBM shedding less profitable parts of its business. This quarter showed the continued slide in System X sales, which declined by 18 percent.

The System X products "did not fit the high-value model" that IBM is pursuing, Schroeter said.

Schroeter was more optimistic about the upcoming release of the next generation of Power8-based servers, which he said will be well-suited for big-data workloads that are popular in industry now.