The number of ad clicks it sold increased, but the price of those clicks declined on average 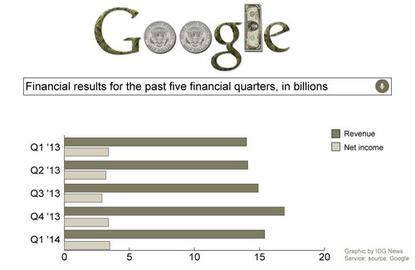 Google's earnings for the past five financial quarters.

Google reported a 19 per cent increase in revenue for the first quarter, but results from its advertising business were mixed.

Revenue for the quarter ended March 31 was $US15.42 billion, Google reported Wednesday. That was a healthy jump from last year but less than the $US15.52 billion analysts had been expecting, according to a poll by Thomson Reuters.

Google's earnings per share, excluding costs like those from the sale of its Motorola Mobility division, were $US6.27 per share, which was better than last year but also lower than expected.

The results hurt Google's share price in trading after hours. Its stock was down about 3 percent at the time of this report, to $US541.13.

The number of paid clicks, or clicks on ads paid for by advertisers, climbed 26 per cent from the first quarter last year, Google said. But the cost of those clicks, or the amount advertisers paid, dropped roughly 9 per cent.

Subtracting traffic acquisition costs, or the money Google pays to partners that run its ads or direct traffic to its websites, the company's net revenue was $US12.19 billion.

CEO Larry Page called it "another great quarter," noting the big rise in revenue. "We got lots of product improvements done, especially on mobile. I'm also excited with progress on our emerging businesses," he said in a statement.

During the quarter, Google announced a deal to sell Motorola Mobility to China's Lenovo Group for $US2.91 billion, after paying more than $US12 billion to buy the handset maker in the first place. On Wednesday Google reported a net loss from discontinued operations, which includes that sale, of $US198 million, compared to a loss of $US182 million in the first quarter last year.