Samsung's lawyers try to put a human face on Android 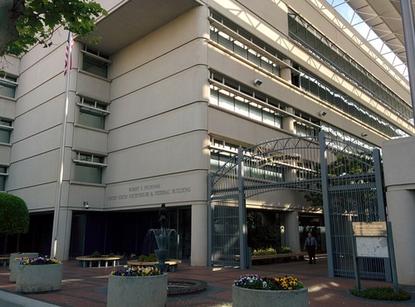 The federal court building in San Jose, California, on April 11, 2014

Samsung's lawyers tried to put a human face on Google's Android development efforts as they opened their defense Friday against Apple's patent infringement claims and its demand for US$2.2 billion in damages.

The eight-person jury at the federal court in San Jose heard about the early days of Android, the long hours engineers put into the operating system and the "tasty treats" successive iterations were named after, including Ice Cream Sandwich and Honeycomb.

"We haven't talked in a while but can you come over and check out what we're working on. We think you might like it," former Android chief Andy Rubin said in an email to Hiroshi Lockheimer, vice president of engineering on Google's Android team.

"He gave me a demo and I was blown away," Lockheimer recalled in court Friday. "It didn't occur to me. Remember, this was eight years ago. I thought of Google as a search company and I didn't realize Google was working on a mobile operating system."

Two months after the demonstration, in January 2006, Lockheimer joined Rubin's team at Google.

He talked about Google's goal to come up with a single phone platform that was consistent and open source, and of the long hours the team of 20 to 30 engineers put into developing it.

Samsung's lawyers were trying to point out the hard work that went into Android, as a counterpoint to Apple's assertion that Samsung's devices merely copied those of its competitor. They were also trying to emphasize that Google, not Samsung, was responsible for many of the phones' features.

It wasn't dissimilar to how Apple's lawyers opened their case, with marketing chief Phil Schiller and other executives recounting stories of the iPhone's early development.

That may be partly down to the enigma of founder Steve Jobs and his famous obsession with secrecy. It creates an air of mystery and drama around what happens at the company.

One Apple executive spoke last week of secret meetings with Jobs in a "dark, dirty, windowless room." He described the challenge of getting Jobs' approval for iPhone features, the nerves he felt the day the iPhone launched, and the dinner he had with his family to celebrate the launch.

When Lockheimer was asked if the launch of the first Android phone was a big day for him, he replied simply, "Absolutely, it was a huge day for me."

While the secrecy at Apple might have made the iPhone story more engaging, what happened behind the scenes at Apple hasn't always worked in its favor during the trial. Internal emails from Jobs mentioning a "holy war" against Google, and an exchange between Schiller and CEO Tim Cook that discussed the possibility of replacing Apple's advertising agency, are stories the company might have preferred to remain secret.