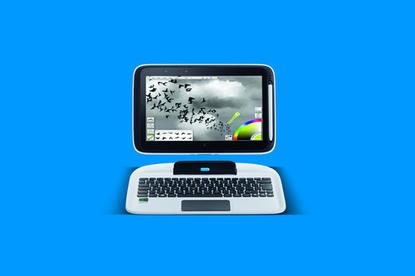 Intel this week showed off a laptop-tablet hybrid with Windows 8.1 for the education market, where Chromebooks and tablets are also fighting for position.

The Intel Education 2-in-1 hybrid has a 10.1-inch screen that can detach from a keyboard base to turn into a tablet. Intel makes reference designs, which are then replicated by device makers and sold to educational institutions.

The 2-in-1 has a quad-core Intel Atom processor Z3740D, which is based on the Bay Trail architecture. The battery lasts about eight hours in tablet mode, and three more hours when docked with the keyboard base, which has a second battery.

Intel did not immediately return requests for comment on the estimated price for the hybrid or when it would become available.

Education is a hotly contested market among computer makers, as Apple pushes its iPads and MacBooks while PC makers like Dell, Hewlett-Packard and Lenovo hawk their Chromebooks.

Some features in the Intel 2-in-1 are drawn from the company's Education tablets, which also run on Atom processors, but have the Android OS.

The 2-in-1 hybrid has front-facing and rear-facing cameras, and a snap-on magnification lens that allows students to examine items at a microscopic level.

The computer can withstand a drop of 70 centimeters, a feature added as protection for instances in which children mishandle laptops and let them fall. The keyboard base also has a handle.

The screen can be swivelled and placed on the keyboard, giving it the capability of a classic convertible laptop. This feature has been drawn from Intel's Classmate series of education laptops.

The 2-in-1 has software intended to make learning easier, including tools for the arts and science. Intel's Kno app provides access to 225,000 books. Typically, some of the books available via Kno are free, while others are fee-based.