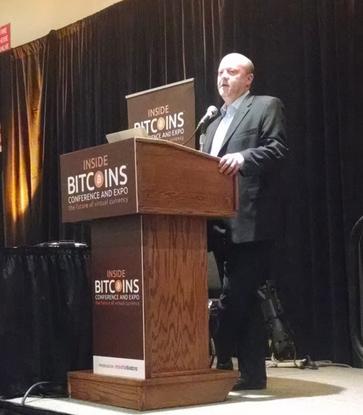 Jeremy Allaire, CEO of digital currency company Circle, at the Inside Bitcoins conference

Bitcoin today is like the Internet of 20 years ago, showing immense promise but in need of much more development, a digital currency executive said Monday, kicking off the Inside Bitcoins conference.

As the first digital system offering the possibility to store and transfer currency value in "a completely distributed manner," it holds the promise to become a huge, global system, allowing people to securely exchange money through email or some other digital means at no cost, without involving a central bank, said Jeremy Allaire, CEO of Circle.

"The early technologies were crude, but they served the basis for worldwide commerce," Allaire said of the Internet, circa 1994. "We're at this point in evolution. These transformations take a long time."

Overall, it could take Bitcoin about 10 years to posses the full technology stack for mainstream usage.

To date, Bitcoin use has only "highly limited user engagement," Allaire said. Most people using Bitcoin are either enthusiasts, technology early-adopters, or just buying and holding on to bitcoins for investment purposes. Few people are using it as a form of payment.

"There is not yet a killer app for Bitcoin," Allaire said in his keynote speech at the conference in New York.

Allaire mentioned a number of things that would need to happen to make Bitcoin ready for widespread public use. For one, the technology still needs to be advanced. The core of Bitcoin is in place, but many additional elements are required. Much like Web-server technology in 1994, Bitcoin technologies are still in their "pre-1.0 phase," he said.

Overall, the Bitcoin network can handle about nine transactions a second, a rate that needs dramatic improvement.

"The fundamental architecture will need to scale beyond what the largest platforms are capable of today," Allaire said.

The programmatic capabilities of Bitcoin also need to be expanded. "The logic is highly constrained," he said. Expanding how Bitcoin could be used will open up possibilities for new types of businesses that would be built around the service.

The service will need a way to identify the buyers and sellers in a Bitcoin exchange for purposes of law enforcement and protecting consumers from scams. He called this requirement "counter-party identification" and noted it could be done in such a way that it did not compromise users' privacy or anonymity of transactions.

"There is a middle ground that balances the privacy of cash with an audit trail that can aid law enforcement in legitimate law-enforcement investigations," Allaire said.

Also, banks, governments and standards bodies need to get involved, he said.

The participation of banks and other digital currency service providers such as Paypal will be necessary to make it easy for people to access their bitcoins through cash machines and bank accounts. Although early users of Bitcoin have resisted the idea of bank involvement, they are essential to foster wide-scale Bitcoin adoption, Allaire said.

Eighty-five percent of monetary transactions today are done with cash, he noted, so it is essential to offer many choices to convert bitcoins into local cash currencies.

"Users will demand their money to be interoperable," he said. "It's not difficult to imagine every payment processor accept Bitcoin."

There is a "huge opportunity," for companies willing to get involved with Bitcoin, he said. Much like Versign and RSA emerged from the early commercial days of the Internet to provide secure technologies for e-commerce, so too companies will emerge to serve the Bitcoin market.

Allaire estimated that approximately 2,000 startups have already been formed around Bitcoin.