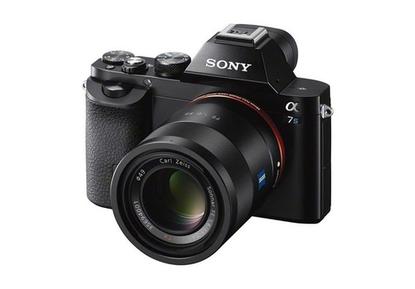 The palm-sized camera has a 12.2-megapixel Exmor CMOS full-frame sensor, meaning it's the same size as a traditional 35 mm film frame.

Sony said that when used in the 24p/30p 4K movie setting, it's the only full-frame sensor that can read the entire width of the pixel array without pixel binning for video.

Pixel binning refers to the process of combining the data from a group of pixels into a single pixel. 24p and 30p refer to video formats with 24 and 30 frames per second, respectively.

For photography buffs who like shooting at night, the camera also has a sensitivity range that extends from ISO 50 to 409600, allowing users to capture clear videos in very low light conditions.

Indoor, poorly lit sporting events, which would require a high shutter speed with low noise, are one situation where the Alpha 7S would excel, according to Sony.

Since the 7S has a relatively small footprint, recording in 4K video requires an external third-party 4K recorder via an HDMI (high-definition multimedia interface) link. The camera can record to a compatible memory card at full HD with 1920 by 1080 resolution at frame rates of 60p, 60i, 30p and 24p.

For those who want to create slow-motion effects, switching to APS-C (Advanced Photo System type C), a smaller image sensor format than full frame, will allow it to capture footage at 120 frames per second at standard HD resolution.

The shooter has shutter speeds ranging from 1/8000 to 30 seconds, a 25-point autofocus system and a body-only weight of 446 grams.

Sony has not yet announced pricing or availability for the Alpha 7S.