Amazon's Dash is a Star Trek communicator for grocery shopping 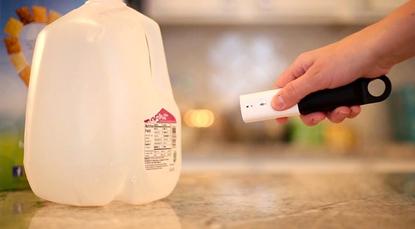 A few lucky customers of the AmazonFresh grocery store will be able to order products just by speaking into the Amazon Dash, a futuristic wand that the company started offering by invitation on Friday.

The Dash is a narrow handheld device that talks to a customer's home Wi-Fi network. When they need an item that AmazonFresh sells, users can press a button on the device and say the name of the product. To buy more of a product that's already in the house, they can point the Dash at its barcode and scan it.

The next time the customer looks at their AmazonFresh account, those items will be ready for ordering, Amazon said.

Though designed for rescue from a meatless Monday or a fruitless Friday rather than a hostile planet, the Dash looks a bit like a communicator from the original "Star Trek" TV series. A video on the Dash introduction page shows how it works.

The Dash is currently free, but only AmazonFresh customers can request one, and that just puts them in line for an invitation to receive one. AmazonFresh, which consumers can use to order about 500,000 grocery and other items for quick delivery, is only available in Amazon's hometown of Seattle so far, plus in the San Francisco Bay Area and Southern California on a trial basis.

The AmazonFresh service requires an Amazon Prime Fresh account, which is free for a 30-day trial and then US$299 per year. Orders of more than $35 come with free delivery.

The Dash is simple enough for children to use, Amazon said. Recognizing the kinds of messes the Dash may get into as a grocery-ordering device, Amazon said you can use it even with flour on your hands. It doesn't claim the Dash is waterproof, though.

Futuristic devices are starting to play a key role in the battle for so-called connected homes, where Internet giants such as Amazon and Google hope to move in with consumers. Earlier this year, Google announced plans to acquire Nest, a maker of Internet-connected thermostats and smoke alarms.