The company has also integrated Facebook with the App Studio service 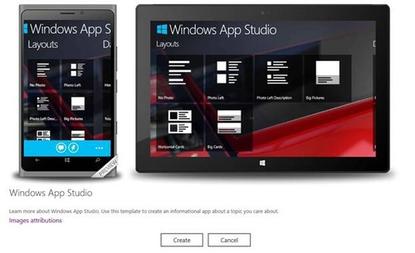 Microsoft's Windows App Studio lets users create apps for tablets and smartphones without having to write any code.

Microsoft's App Studio beta test has been expanded to allow novice developers to build applications for Windows tablets and PCs, in addition to Windows Phone.

Last year Microsoft introduced a beta version of Windows Phone App Studio in an effort to increase the number of apps for its smartphone OS by letting almost anyone build an application. The company has now expanded the platform to let users build for tablets and PCs at the same time, and renamed the service Windows App Studio, it said in a blog post on Friday.

There is also a new device preview that allows users to see how their app will look on a range of devices, including smartphones and tablets.

Applications that were created using the Windows Phone version of App Studio can be upgraded to run on Windows, as well.

Once an app has been finished, users can download it directly to their device or download packages that can be published in one of Microsoft's app stores. It is also possible to download the original source code for Windows Phone 8.0, Windows Phone 8.1, and Windows 8.1.

The App Studio website still has a beta tag and Microsoft didn't announce any details on when it planned to remove it.

The company is also working on making it easier for professional developers to create apps for all kinds of Windows devices. One of the big announcements at this week's Build conference was a concept Microsoft calls universal apps, which will make it possible for developers to write one app that runs on smartphones, tablets, PCs, and the Xbox One.