Sality is scanning the Internet for routers with public-facing configuration panels, Eset says 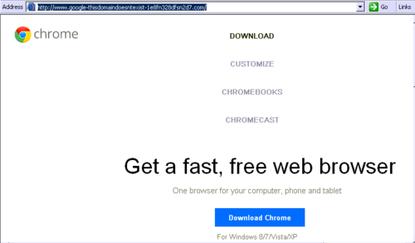 A new version of the Sality malware modifies the DNS settings of routers to direct people to a fake Google Chrome download page.

A botnet that was slowly shrinking has taken on a new trick: brute-forcing routers set to easy-to-guess credentials.

The malware behind the botnet, called Sality, has been around since 2003, in part due to its use of digitally-signed communications and an efficient software design, wrote Benjamin Vanheuverzwijn, a malware researcher with Eset.

Sality is a general piece of malware that can download other components and has been used over the years for misdeeds such as faking advertising network traffic, distributed denial-of-service attacks and cracking VoIP accounts.

But the number of computers infected by Sality appears to have been decreasing slightly over the last couple of years, perhaps due to difficulties in infecting new machines, Vanheuverzwijn wrote on a blog post on Wednesday.

To up its numbers, the latest version of Sality has a component called Win32/RBrute.A that scans the Internet for router control panels and attempts to log into them using a short list of user names and passwords.

"The usual infection vectors of W32/Sality might not be sufficient enough to keep the botnet alive; hence the botnet controllers are deploying new components to grow the botnet," Vanheuverzwijn wrote.

It is targeting 14 router models from TP-Link, three from D-Link, two made by ZTE and one from Huawei. If it successfully logs into a router, it changes the default DNS (Domain Name System) server, which is responsible for translating domain names into IP addresses that can be displayed in a browser.

The powerful attack has long been a favorite of attackers. By redirecting a victim to their own malicious DNS server, the attackers can control where a person is directed to even if they type in the correct domain name for a website.

In Sality's case, it redirects people to a fake Google Chrome browser download page if a person tries to go to Facebook or Google. It then hopes the users will download what purports to be Chrome but is actually Sality.

If Sality is downloaded, the malware then corrects the DNS change to "8.8.8.8," the IP address for Google's free Public DNS service, Vanheuverzwijn wrote.

The number of computers infected with Sality appeared to rise around December 2013, which coincided when the DNS component was added. But it's questionable how effective the new tactic may be in the long term, as many router configuration portals are not configured to be Internet facing, Vanheuverzwijn wrote.

Another weakness is that Sality tries only about 10 sets of simple credentials. But it is possible that Sality could reach a lot of users if it hits a vulnerable public access point used by many people, Vanheuverzwijn wrote.

"A good security practice that would reduce the scope of the problem is to change the default password on a router's web interface," he wrote.