The former Apple CEO planned to speak of a holy war during a 2010 management retreat, according to court exhibits 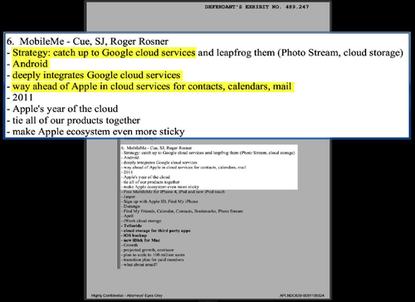 An email from former Apple CEO Steve Jobs outlining plans for an annual management retreat, as shown to a jury on Tuesday

Former Apple CEO Steve Jobs declared 2011 the year of "holy war against Google" in an email to Apple executives ahead of an annual management retreat in late 2010.

The email was revealed Tuesday by lawyers for Samsung, who presented it to a California jury as they opened their defense against Apple's claims of "massive infringement" of five smartphone patents.

Samsung lawyers came across the Jobs email after it was forwarded by Phil Schiller, Apple's head of marketing, to Michael Tchao, an iPad marketing executive.

Sent on October 24, 2010, the message is Jobs' then-current line-up for that year's "Top 100" meeting, an annual Apple retreat that brings together top executives from the company where they get briefed on the state of the company, new products and new services.

The first item on the agenda is an overview of Apple's strategy for 2011 presented by Jobs himself. The items include an update on the company, its business and the success of new products like the iPad, which was introduced in April 2010.

"Apple is in danger of hanging on to [the] old paradigm too long (innovator's dilemma)," wrote Jobs. "Google and Microsoft are further along on the technology, but haven't quite figured it out yet."

With the email, Samsung lawyers are attempting to make a couple of points: that Apple was concerned about Android in general and not specifically about Samsung, and that the Android operating system was ahead of Apple's iOS in several areas.

That latter point was underlined in another section of the email that referred to a session to be led by "Scott and Joz," presumably Scott Forstall, former head of iOS, and Greg Joswiak, the current head of iOS and iPhone.

The first item on the agenda was: "Strategy: catch up to Android where we are behind (notifications, tethering, speech, ...) and leapfrog them (Siri, ...)"

In a 2011 biography of the Apple founder published shortly after Jobs' death, author Walter Isaacson quoted Jobs as saying, "I'm going to destroy Android, because it's a stolen product. I'm willing to go thermonuclear war on this," and later "I will spend my last dying breath if I need to, and I will spend every penny of Apple's $40 billion in the bank, to right this wrong."

It's important to note that the email contains Jobs' plans for the meeting and doesn't prove whether he actually called for a "holy war" while he was in front of executives.