Google Glass app tells you when you're broke 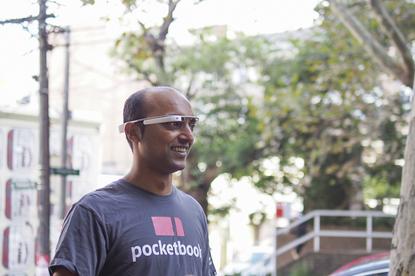 Pocketbook is building a Google Glass app that will let users see if they can afford the goods or services they’re eyeing.

The Sydney startup, which has a money management website and apps that consolidate users’ bank account information into a single view, said it’s experimenting with the wearable headset.

In one example application, the Google Glass user is exploring a café district in Melbourne. The Pocketbook app recognises this and shows the user that he has $50 left in their budget for eating out. The information is presented alongside café ratings from sites like Urban Spoon.

In another example, the Glass wearer is looking at laptops in an electronics store. The Pocketbook app flashes a message saying the user is already $200 over their budget for gadgets.

Another feature would show a map of the closest ATMs for all of the user’s banks.

And a final nifty experiment automatically pulls up a user’s balance for the specific bank card she is looking at.

“The ability to richly communicate without any physical interaction is the real innovation,” said Pocketbook CEO Alvin Singh.

“The Google Glass technology also sits firmly in line with our design philosophy of ‘If it’s not simple, we don’t build it’. The device provides the potential for a much simpler and seamless user experience compared to a smartphone.”

“Glass creates a means of intertwining everyday consumption with the world of banking in a seamless way – which pushes the boundaries of what we’re able to achieve today in building the simplest service to manage your money.”

Adam Bender covers telco and enterprise tech issues for Computerworld and is the author of dystopian sci-fi novels We, The Watched and Divided We Fall. Follow him on Twitter: @WatchAdam