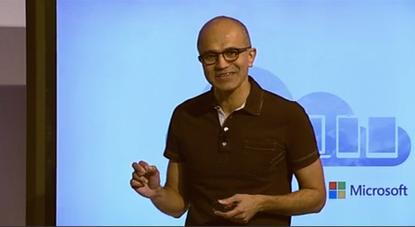 Satya Nadella talks about new Microsoft products during a webcast.

Microsoft has finally developed a version of Office for the iPad, a move many feel comes too late.

The company made the announcement at a press conference in San Francisco that was webcast Thursday and hosted by Satya Nadella, Microsoft's newly appointed CEO.

A Microsoft official demonstrated Excel, Word and PowerPoint working natively on an iPad and said the suite would be available later Thursday at the Apple App Store.

The decision brings together two of the world's most massively popular personal computing products: the ubiquitous and dominant Office productivity suite and the iPad, which Apple first released in 2010, igniting a tablet revolution.

Microsoft had been taking gradual, deliberate steps in this direction. It released a version of Office for the iPhone last year, but that product hasn't caught on, primarily because many Office functions don't lend themselves to smartphone screen sizes.

Microsoft has also progressively tweaked Office Web Apps -- a browser-based version of the suite with limited functionality -- to work better with Safari on the iPad.

Moreover, Microsoft has released individual apps for iOS in recent years, including SkyDrive and OneNote.

However, the company had resisted releasing a full-featured, native version of the suite with its core Word, Excel and PowerPoint apps. This opened the door for competitors to offer a wide range of alternatives.

It has been assumed that Microsoft's reluctance to fully embrace Office for iPads was the result of concern that this would detract from the attractiveness of Windows 8 and help iOS.

One of the biggest blunders for Microsoft in recent years was its inability to position Windows to capitalize on the blazing hot popularity of smartphones and tablets as Google did with Android and Apple with iOS.

As hundreds of millions of people bought iPhones, iPads and Android smartphones and tablets, they brought them to the office, igniting the consumerization of IT trend, so Microsoft found itself lagging in this market both at home and at work.

When Microsoft belatedly released versions of Windows designed to make up the lost ground -- Windows Phone 8 and Windows 8 -- they didn't succeed as the company expected.

Microsoft is still laboring to refine those operating systems and is doubling down on the mobile market by making its own hardware devices. It started with its line of Surface tablets and is in the process of acquiring Nokia's smartphone business for a whopping US$7.2 billion, a deal that still hasn't closed.

Adapting Office for touchscreen devices is also a tall order and the complexity of the endeavor likely also added to the late arrival, since the way of interacting with the applications needs to be rethought and redesigned.