The HX-A500 can be looped around your ear for a high-resolution, first-person view of anything from watersports to mountain climbing 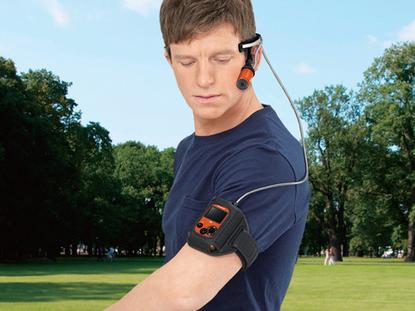 Panasonic brings 4K 25p resolution to its wearable camcorders with the HX-A500, set to go on sale in May with a suggested price of about US$626.

If you want to record your next climb up a cliff in extreme detail, Panasonic is offering a high-resolution wearable camera that shoots in 4K at 30 frames per second progressive.

The HX-A500 is being touted as the first wearable camera in the world of that resolution. It's aimed at users who want to record from a first-person perspective on land or water while having their hands free.

The waterproof, dustproof device can go underwater to a depth of 3 meters for 30 minutes. It comes in two parts, a 31-gram lens unit and a 119-gram body unit, that are linked by a cable.

It can attach to your clothes, helmet, or sleeve. The lens, for instance, can loop around your ear with an attachment and nestle against your cheek so it captures everything you see.

Other accessories allow it to be attached to a shoulder, backpack or handlebars. A wind jammer attachment cuts out noisy gusts during fast-moving activities like skiing.

The body unit has a 1.5-inch LCD monitor for playback as well as NFC (near field communication) for linking to a Wi-Fi connection on a smartphone or other mobile device.

If you're concerned about potentially making viewers a little seasick with footage taken at odd angles, the HX-A500 can detect when it's shooting at a tilt, which it corrects by adjusting the final images. It can also automatically reduce blur from motion.

The camera can also capture slow motion video at 200, 100 or 50 frames-per-second. An associated app can send footage to streaming site UStream for live broadcasts.

The HX-A500 is a successor to the lower-resolution HX-A100, an action camcorder with a similar form factor that was launched at CES 2013.

A separate release said the unit will be available in the U.S. in July. A spokeswoman at the company's office in Tokyo was unable to give a price for the U.S. market.

The price tag of $626 is significantly more than the $399.99 GoPro Hero 3+ ruggedized action cam that shoots in 4K at 15 frames per second. The GoPro camera weighs 74 grams for the camera alone, or 136 grams including its waterproof housing.