SDK will let users save interesting articles straight from their smartwatches. 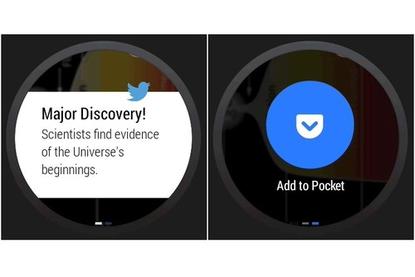 Pocket, an app that lets you save online links for later reading, has announced a software development kit for Android Wear.

Now you can count Pocket among the app makers that are excited about Android Wear, Google's upcoming software for wearable devices.

Pocket, an app that lets you save online links for later reading, has announced a software development kit (SDK) for Android Wear. This will allow other apps to include an "Add to Pocket" button to their Android Wear notifications.

Pocket gives an example: Let's say a friend sends you a link to an interesting story via Twitter. A notification with the story's headline would appear on your smartwatch, and from there you could swipe to the left to show an "Add to Pocket" button. Pressing the button would save the article to Pocket, so you could read it on your phone later.

In a blog post, Pocket's Android development lead Max Weiner touches on what's unique about Android Wear compared to existing smartwatch platforms: "Up until now, smartwatches have focused solely on delivering short notifications," Weiner wrote. "Yet what's been missing is the ability to quickly act on that information by saving or sharing it."

Actionable notifications are already built into Android--for instance, you can archive a Gmail message straight from the notification bar on an Android phone--but Android Wear will likely allow developers to expand on these actions.

Other developers have also shown interest in adopting Android Wear because of its deeper ties to Android. Evernote, for example, says it will allow Android Wear users to get reminders about notes they've created, and the company is looking to support voice commands for taking notes through the watch. Runkeeper says it is "anxiously awaiting more information" on Android Wear's fitness-tracking capabilities.

It's still early days for Android Wear, and Pocket says its SDK is a work in progress. The first Android Wear smartwatch from LG is coming next quarter, and Motorola plans to release its Moto 360 watch some time this summer.